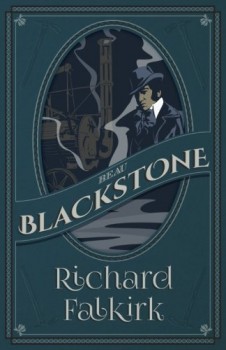 Bow Street Runner Edmund Blackstone has gone undercover to prevent the opening of the Stockton and Darlington railway being sabotaged, but he’s up against stiff opposition.

Bow Street Runner Edmund Blackstone is out of his comfort zone in this third book in Richard Falkirk’s rollicking Georgian detective series. He’s been dragged away from his usual stamping grounds in London by his long-suffering boss Sir Richard Birnie, and sent undercover as a navvie working on the Stockton and Darlington railway.

Those backing the new railway are worried that their enterprise is going to be sabotaged by reactionary landowners stirring up job-related fears amongst the farm labourers and capitalising on the navvies’ bad reputation in the local towns and villages. The navvies’ lawless, hard-drinking lifestyle isn’t winning them any friends and Blackstone has a difficult job on his hands infiltrating their ranks and getting close to Petro, their acknowledged leader, who regards himself as well above anyone who tries to curb his behaviour and that of the workers he rules.

And there’s also the inconvenient matter of highway robbery and the threat of the world’s first train robbery to contend with!

I first encountered Edmund Blackstone when the series was first published in the 1970s and quickly fell in love with the handsome, sardonic law enforcer who’d dragged himself out of one of London’s worst slums to make a name for himself amongst both ordinary people and the gentry alike. Blackstone isn’t averse to bending – and even occasionally breaking – the laws he’s charged with upholding. He has a liking for prize-fighting but has a deep loathing of cruelty to animals, which makes him something of an oddity in an age where cock-fighting and dog-fighting are popular sports.

The social and economic background in the book was one of the things I found most fascinating. George Stephenson makes an appearance, passionately advocating the benefits the railways will bring, but Falkirk also brings out his lack of business acumen and the problems he caused for himself by not having a sufficiently good grip of financial matters to be able to stand up to his opponents in the inevitable battles over the railway and bridge building.

Falkirk paints a vivid picture of life – and death – amongst the navigators who were doing all the hard work. As ever, Blackstone’s basic decency shines through, even in a harsh setting like this, although I wasn’t quite sure of the relevance of the ‘Beau’ Blackstone title, as his love of elegant clothes hardly gets much of an outing.

Blackstone’s nemesis, criminal and assassin Henry Challoner, is back. Like Blackstone, he’s another complex character. Challoner grew up in the same slum, and there’s a tantalising hint that the two men might have more than that in common. Challoner regards the Bow Street Runner as a traitor to his upbringing but on both sides there’s a grudging, unacknowledged respect that gives an added dimension to their encounters.

I was fascinated by the background, intrigued by the plot, engaged by the characters and thoroughly enjoyed this latest Georgian crime romp. If you haven’t met Edmund Blackstone, I’d be delighted to affect an introduction. He might even offer you some snuff, so be warned!