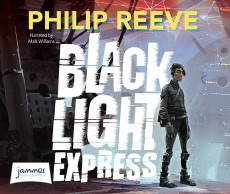 Empress Threnody Noon has been deposed. She needs the help of a thief and a psychotic war train to get her to safety, but she soon realises nowhere is safe.

Zen Starling and Nova, a type of android known as a Motorik who thinks, feels and even loves like a human, have fled conflict in the Network Empire and are now traversing strange worlds and meeting even stranger inhabitants. Zen and Nova’s means of transport is the Damask Rose, an intelligent locomotive capable of passing through the K-gates that link the rail networks that have spread out across the galaxy.

In the Empire itself, Empress Threnody Noon is caught up in a vicious power bid by the ambitious Prell family, who are determined to oust her and set one of their own on the throne of Grand Central. Threnody is helped in her escape by Chantni, a young thief who has recently emerged from a cryostatic prison where offenders are frozen and serve out their sentences before being thawed out and reintroduced to the world, often a very different one to the world they left behind.

With the help of the Ghost Wolf, an entertainingly psychotic decommissioned war train, Threnody and Chandni manage to escape, but the Prell family don’t give up easily. When Threnody and Chandni meet Zen and Nova, the tension between them threatens to become explosive, but they have to join forces to survive.

Philip Reeve’s vastly entertaining sequel to Railhead can be read without reference to the first book, although I suspect it took me slightly longer to get into the story than if I’d read the previous book. The opening chapters devoted to Zen and Nova left me feeling slightly at a loss at times, but when the story switched to Threnody’s escape from a relentless pursuit on her home world, I was quickly dragged along for the ride. For me, one of the standout characters in the book is the sentient ex-battle train, the Ghost Wolf, whose wry asides and dark outlook provide plenty of black humour worthy of a grizzled old warrior.

The quality of Reeve’s world-building in this teen adventure is outstanding, as he weaves a complex tale of worlds that manage to be both familiar and unfamiliar at the same time. The unimaginably vast rail network connecting different worlds is a strong, well-executed concept. Like all good science fiction, Black Light Express stretches your imagination, but never drags it to breaking point. I was able to easily picture the different races the group encounter on their travels, from technologically advanced warlike dinosaurs to the innumerable bugs that come together in hives as sentient individuals.

In the background lies the mythical Railmaker and the mysterious Guardians who guide humanity, as well as keeping them from the knowledge of the fate of the Railmaker. My appetite was well and truly whetted for both the earlier book in the series and the sequel, Station Zero. This is quality teen science fiction that doesn’t in any way talk down to its audience. It’s fast and it’s dark with plenty of humour leavening the deeper themes of politics, war, betrayal and danger.

Malk Williams is a versatile narrator, handling a wide range of voices with admirable style, moving easily from male to female, human to sentient train, and from alien to alien with neither pause nor misstep, providing a masterclass in easily accessible voices.

I want to know where Reeve will take these characters next, as it clear that their stories are far from over. And I desperately hope we get to meet the Ghost Wolf again!