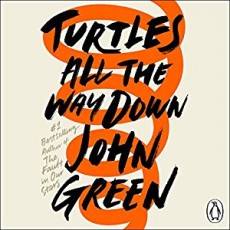 Turtles All the Way Down

American billionaire. Russell Pickett has disappeared and there’s a reward for any information that leads to him being found – alive or dead. Sixteen-year-old Aza and her friend Daisy need the money, so some sleuthing is in order.

The latest news story to hit their home town intrigues 16-year-old Aza and her friend Daisy. Billionaire Russell Pickett has gone missing and there’s a $100,000 reward for anyone who finds him. As Aza and Daisy are both flat broke, the idea of the reward is a big draw.

Pickett has gone AWOL just before a whole series of dodgy deals and bad behaviour was about to catch up with him, but he’s left behind his two sons. Davis, who used to go to school with Aza and his younger brother Noah, have been left with only a housekeeper to look after them. Pickett’s will leaves the bulk of his billions to his pet Tuatara lizard and then, in the event of her death, to a foundation for the care of Tuataras everywhere and for research into their remarkable longevity. Davis and Noah will get very little in the event of Pickett turning up dead.

The boys want to know what has happened to their father, but if he’s dead, finding out will mean the end of their seemingly endless money and a goodbye to their huge mansion with its private golf course, in-house cinema and swimming pool as well as their life of luxury.

Turtles All the Way Down is a penetrating look at teenage friendship, but above all it’s an even more penetrating look at Aza’s mental health issues. Aza suffers from anxiety and struggles with the challenges of an obsessive/compulsive problem that forces her to constantly dig her nails into her finger, preventing it from healing as she draws fresh blood and then her anxiety takes over, convincing Aza that she’s getting an infection that will quickly spiral out of control and kill her.

Aza’s continual struggle with her mental health is brought to life vividly and realistically and the book should be compulsory reading for anyone who has lived with the torment of mental health issues, and indeed anyone who hasn’t. We all have something to learn from this, and a degree in psychology is there for the taking if you want to read this book and put its lessons into practice. John Green’s understanding of the subject is immaculate, and issues from a deep well of empathy shine a light into the frequent darkness in Aza’s mind.

Friendships underpin the story, and adults don’t get that much of a look-in, which is fair enough, as it’s Aza’s story and Green seems fully aware of that. Davis Pickett knows what loss is like, as his mother died only a few years ago. In Aza’s case it was the sudden and unexpected death of her father, so she understands and empathises with what Davis is going through. She starts to fancy him, but any intimacy between them has a third person in the mix, namely Aza’s inner voice that constantly informs her exactly how many microbes are transmitted through a kiss. And no, don’t ask – if I tell you, it’ll put you off kissing for a very long time!

This isn’t Nancy Drew or any of the Enid Blyton teenage ‘find-outers’, and the mystery of Pickett’s disappearance remains in the background while Aza and Daisy attempt to sort out the tangle of their lives in their last year of school before the transition to the more autonomous environment of college.

Both Aza and Daisy are standout creations, with narrator Kate Rudd at home amongst all the different voices. Daisy is a sharp as a bucketful of tacks and her lively voice reflects that. The only person who seems to cause the narrator trouble is Davis, and he comes over as rather more ponderous than the dialogue would suggest.

Turtles All the Way Down is an excellent portrayal of mental health issues amongst teenagers and, if read from cover to cover, it will broaden anyone’s understanding of these issues and inject some much-needed empathy into the minds of those who think you can just wave a magic wand and make anxiety and depression go away. If Turtles All the Way down only serves to make one person examine their own prejudices and behave differently as a result, then it will have been worth it.