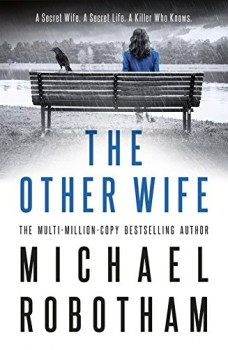 Psychologist Joe O’Loughlin is called to St Mary’s hospital in London where his eminent surgeon father William is in a coma after a vicious attack. But the crying woman by the bedside, who introduces herself as William’s wife, isn’t Joe’s mother and he’s never seen her before.

It looks like it’s the end of the road for Joe O’Loughlin, Michael Robotham’s shrink hero. And if this is to be his last case, as the author suggests, it’s an intensely personal one.

The series, which kicked off in 2004 with The Suspect, looked like Joe and former cop Vincent Ruiz would alternate the lead roles. But the four most recent books, including this new one, have featured Joe to the fore, even if Ruiz is usually lurking around in a support role. Incidentally, I wish I could remember what happened to DC Alisha ‘Ali’ Barbar, who appeared in Lost (later renamed as The Drowning Man) and then took the lead role in the third book, The Night Ferry. I liked her.

In the most recent books, Joe has been battling with both Parkinson’s and family tragedy. Following the death of his wife Julianne, Joe and his daughters Charlie and Emma are back in London after their stay in rural Somerset. And Emma’s behaviour is giving Joe plenty of cause for concern. Whereas the West Country backdrop often played a significant part in books, the capital city is almost incidental in The Other Wife. And there’s little sign of Joe’s day job and his troubled clients.

What is to the fore is both family history and family secrets. Joe is summoned to St Mary’s hospital in Paddington where his father William, an eminent surgeon, is in a coma following a vicious attack. The sobbing and blood-stained woman at his bedside introduces herself as William’s wife. Except, she’s not Joe’s mother Mary, who’s been married to his father for 60 years, and he’s never seen her before. And as he doggedly pursues answers – against the express instructions of the police – and digs into his own past, it soon becomes clear that truth is in short supply amongst those he knows well, as well as the mysterious and beguiling Olivia.

The Other Wife isn’t an all-action romp, although there are arse-kicking moments when Ruiz is called in to back Joe up. The former cop, who surely must be knocking 70 (we never met him in his heyday), is now a fraud investigator, which comes in useful when Joe starts digging into this family morass. What we do get is an intelligent psychological thriller with the dogged and cerebral Joe – who himself is nearer to 60 than 50 – battling illness, demons, memories and unexpected new threats to uncover toxic secrets.

I shall be sorry to see this series finish as Robotham has presented it with wit, grit and a journalist’s matter-of-fact prose. But a touching late scene with Joe and his daughters ensures that it goes out on a heart-tugging note. And the final scene with a character who I’d desperately like to see more of leaves the way open for Joe to return, should the author be prevailed on to change his mind …