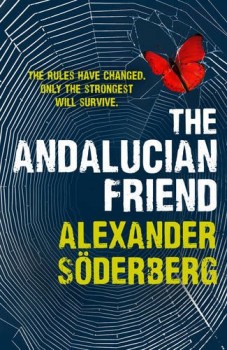 Nurse Sophie Brinkmann befriends a patient, Hector Guzmann.  He is charming, urbane and an international drug dealer.  Sophie then finds herself and her family embroiled in a world of violence and murder.

Sophie Brinkmann lives in a quiet, pretty suburb of Stockholm with her teenage son, Albert.  She is a widow and works as a nurse at a hospital in the city.  She becomes friendly with patient Hector Guzmann, a Spaniard living in Sweden, who has a broken leg after a hit-and-run road accident.  When he leaves hospital, Hector asks Sophie out and their friendship blossoms.

What Sophie does not know is that Hector’s family is deeply involved in international crime and drug dealing.  She finds herself under police surveillance and witness to a shooting.  The policemen watching her becomes obsessed with her as he reverts to an old drug habit and then an old boyfriend, Jens, now an arms dealer, returns and complicates matters further, having become involved in a feud between the Guzmann family and another drug lord.

As Sophie and her family are dragged further into Hector Guzmann’s world, her situation becomes increasingly dangerous and eventually her family has to pay the price for her involvement.

The book ranges from South America to Munich via rural Denmark and Spain, but it is mainly set in and around Stockholm.  Despite never having visited the city, I could visualise its suburbs, streets and open spaces from the descriptions.  Many of the characters, however, were less three-dimensional.  Although the principals had some indication of a life outside the story, the various Russian thugs, corrupt policemen and hangers-on were at best only sketched in.

How likely is it that a suburban nurse would calmly accept car chases and attempted murder?  What are the chances that an arms dealer will get caught up in a feud between two drug dealers, one of whom just happens to be in a relationship with his close friend from many years ago?  The coincidences were just too big to be believable, as was the way the police were able to act completely outside any normal chain of command.

The book is billed as the first in a trilogy.  The author certainly left plenty of material for the next two books, as there were several loose ends that were left unexplained.  Unfortunately, the story does not really gel as a standalone book with a start, middle, and particularly, an end, but reads more like an episode of a drama with a minor cliffhanger at the end to entice the reader to the next instalment.