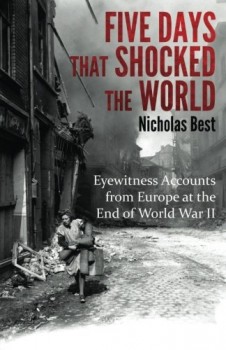 Five Days That Shocked the World

First-person accounts of the famous, soon-to-be-famous and the unknowns who lived through the dramatic days from April 28 to May 2 1945, covering the deaths of the Fascist dictators Mussolini and Hitler, the fall of Berlin and the end of the six-year war.

Nicholas Best’s superb The Greatest Day In History chronicled the catastrophic final week of World War I. His second historical work performs the same function for the European theatre of the 1939-45 War. The five days from April 28 to May 2 1945 saw the execution of Italian dictator Benito Mussolini, the suicide of Adolf Hitler and the fall of Berlin as a prelude.

This is a deftly written, immensely readable account that makes history read like a novel. Personal narratives of some of those involved – the well known, the yet to be famous and the bit part players – make this chronological, fast moving, yet easy to read book a must for any student of major events.

In a series of snapshots, as vivid and captivating as the events and people they describe, these eye-witnesses offer the hidden stories of those five days – the reader can almost taste the fear, feel the horror and disgust, the adrenaline surge as Best omits no grisly, or even inconsequential, detail of the human cost of war, such as the effect on morale on the surviving women in Belsen concentration camp through the introduction of lipstick.

The reader can follow a young Walter Cronkite, parachuted into Holland with a Canadian unit; photographer Lee Miller capturing the horrifying evidence of Nazi atrocities; the future Pope Benedict hoping not to be caught and shot after deserting; the young Sophia Loren, facing an ordeal with women-hungry Moroccan soldiers, and Audrey Hepburn, the daughter of a Dutch aristocrat, fearing conscription into a Wehrmacht brothel.

Alongside these famous, or soon to be famous, names there are the memories of the secretaries and other functionaries in Hitler’s bunker, as well as the testimony of Allied bomber pilots who flew the unbelievable Operation Manna to drop foodstuffs to the starving Dutch population.

In skilfully synthesising these personal narratives, Best creates a compelling chronicle, creating an impressionistic description of the confusing end of a war which must have seemed like the end of the world to those caught up in those frenzied days. Best does not interpret history, nor sugarcoat atrocities and does not moralise, but allows the reader to draw their own conclusions.

As Fascists and Nazis try to find ways to escape or whitewash their pasts, in Italy the partizans savagely turn on their nation’s former leaders. The Russians’ rape and pillage of Germany and the failure of the British and Americans to protect German soldiers and guards in the camps are all part of a story told with pace, accuracy and ability to report without prejudice or any attempt to persuade the reader.

The beauty of Best’s informal and easy-to-read style is that he is wise enough to allow the reader to discern who they choose to believe in terms of accounts that are in conflict. His understanding of human nature, and how man reacts to trauma, coupled with the natural desire for his ‘15 minutes of fame’, presupposes the reader is intelligent enough to sift through opposing statements. Jumping from one location to another, within the same date, he offers his readers not only the geographical change, but also a new story told from a unique perspective.

Best offers all their gripping experiences with skill – and includes an invaluable epilogue to explain what happened to his protagonists after the war ended. This is a brilliant and very different account of five days which changed the world. Even if you are no history fan, this is worth reading solely as a background to current events.