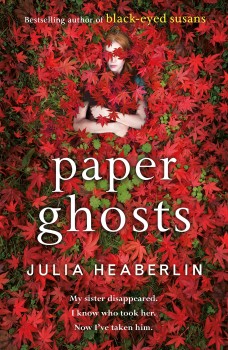 Carl Feldman may be her sister’s killer. And the game she is about to play may make him her killer too.

Carl Feldman used to be a famous photographer whose books sold countrywide until he was tried for the murder of a young mother. Although acquitted he now lives in a halfway house for outcasts and criminals with dementia. His mind is failing, and there's much he doesn't remember about his past. He even has arm tremors, and it all points to dementia.
But when a young woman starts visiting him regularly, claiming to be his daughter, he seems sure she isn’t. Then the truth comes out. She wants to take Carl on a road trip across Texas. She's not letting on yet, but she is convinced Carl knows what happened to her sister Rachel, who disappeared when she, Carl’s supposed daughter, was 12. In the intervening years, she has accumulated clues and evidence that point squarely to Carl's guilt, not least his own photographs.
Now, with the security of self-defence and survival training, she is going to rattle Carl’s cage. She will make him remember. She will make him confess. And she believes she will get out of this alive.
The premise made me hungry, and the earlier chapters of this novel promised a feast of a taut plot filled with suspense. Unfortunately, the middle of the story sagged in plot terms, and the ending was a squandered opportunity. In that respect, I closed the book still more than peckish. But, and it is a big but, the main characters, Carl and the grieving sister, are beautiful studies of the satisfying mind of an obsessional woman, and the sinister yet sad behaviour of a man who seems to be losing his mind.
Their interaction is more compelling and disturbing than the plot. Their mutual distrust and, at times, ugly behaviour intertwined with moments of compassion and begrudging mutual respect, is fascinating. I feasted on the ever-shifting dynamics between the two on the road trip. Overall, I preferred Carl to the girl, but I connected with both.
The writing style is senses-driven and in places beautifully poetic. That the author has written it in the first person makes it intimate, even though, given the narrator’s point of view, it is biased.
There is an intense sense of place, encompassing the extremes of their bizarre road trip, from the barren to the beautiful, from the comfortable to the unpleasant, from sinister surroundings to mundain ones. Texas became the third convincing character. The sense of time, like the plot, sagged in the middle. I lost track of how many days of the girl’s intended ten-day trip were left. But it didn’t detract from the desire to keep reading.
The addition of notes and photos did nothing for me. They felt gimmicky and interrupted the flow of the story. There are twists, and despite the sag, there is pacing. But this is quiet suspense, not high-octane drama. The people carry the story, not the plot or the action. I found it refreshing to look at an accused serial killer from an unfamiliar perspective.