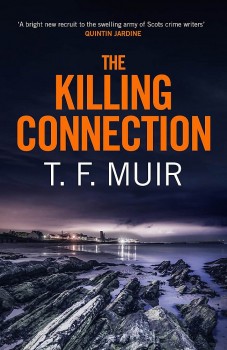 No one knows the woman found dead on the rocks in St Andrews, and DCI Andy Gilchrist senses this will be a complicated murder case.

DCI Andy Gilchrist and his team have nothing to go on. The body of a woman found on the rocks in St Andrews has no ID. There are no witnesses. She is an unknown face. All they know is that it looks like she was strangled. Gilchrist’s new boss is already on his back; it seems his maverick reputation has come to her attention. And that means he must play the juggling game of getting results whilst watching the budget.
Then he gets his first break; a phone call from abroad from a woman who says she knows the victim. Even better, the woman is on her way home and will come in for an interview the next day. But she doesn’t. When they eventually find her, dead and squashed under the floorboards in her house, Gilchrist knows he is on the hunt for an experienced and desperate killer.
The plot is standard, without twists. From early on it is clear who the suspect is, and that he has killed before. The story really comes from the police procedure, with its two steps forward, one step back progress. In some ways, this makes the story feel real. Readers know that not all detectives have Sherlock Holmes’ genes and appreciate that there is a degree of luck and bad luck in investigations as well as a bit of brain power and hard slog. I still question, though, how someone as obtuse as Andy Gilchrist ever made it to DCI. I lost count of how many times he let the killer get away because of his bad calls.
Affable Gilchrist, however, is quite human, and this may be why his investigations are not without fault. We see he tends to make mistakes in his family life as well as at work. He loves his children but cannot get his act together when they need him. He bumbles in his behaviour towards his sidekicks, Jessie and Mhairi. He spends almost as much time fretting about the budget as he does the case. He’s human and flawed but sometimes this breaks the suspension of disbelief. The other characters are less developed, although the author pulls back the curtains every so often on Jessie’s difficult family life, making her more three-dimensional.
TF Muir pays attention to the milieu, particularly the weather. But at times I wondered if he was foreshadowing the importance of the weather in the story, he referred to it so often. Sometimes the choice of vocabulary feels on the quaint side, as if Muir isn’t comfortable with technology. And the dialogue is often too realistic.
The Killing Connection isn’t a world beater, just a solid police procedural and despite Gilchrist’s bumbling, it is fast-paced and graphic without gratuitous violence.