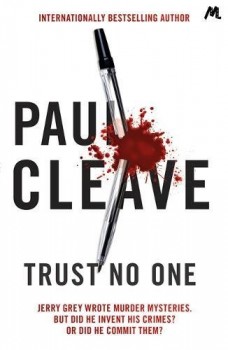 Jerry Grey, a successful author of crime fiction, has been diagnosed with early-onset Alzheimer's. Now that he has trouble remembering, he has apparently started to confess to the murders from his novels. Other women are being murdered too.

Jerry Grey is a successful writer of crime fiction, under the pseudonym of Henry Cutter. In his late forties he is diagnosed with early-onset Alzheimer's and, as a way of dealing with his increasing confusion, he is encouraged to keep a journal.

Through the medium of this journal, interspersed with narrative in the third person, Jerry’s progress into dementia is catalogued and explored. His rational moments allow him to interpret the actions he has been told he has performed when under the control of Captain A, the name that he gives to his Alzheimer's. His actions, when unaware, shock and distress him, not least because he cannot recall either the actions or the emotions.

Jerry’s life is controlled by his wife Sandra, his friend Hans and the staff in the care facility in which he eventually lives. His daughter, who once clearly adored him, is now distant and calls him Jerry rather than Dad, but he does not understand why.

Jerry is apparently excellent at escaping, first from his home and later from his care home, and at these times murders are committed. Jerry’s confessions to the crimes in his novels and the coincidences of his absences from home and the murders lead the police to suspect that there is a case to be investigated. Jerry is influenced strongly by those around him but he does not know who to trust.

This book is constructed with consummate skill. The clever juxtaposition of the first and third person narratives, each running somewhat out of phase chronologically, but with a thread that gives plot continuity, emphasises the confusion caused by the illness. Although Jerry’s descriptions of himself and the unfolding nature of his life make him hard to like, I found that all my sympathies remained with him, with his dilemma and a burning desire for him to uncover the truth, however uncomfortable that may be.

The main protagonists, other than Jerry himself, appear to be somewhat misty, almost ghost-like, in that, through Jerry’s eyes, there is so much about their behaviour that is more about his interpretation than about the way that they are actually behaving. This subtle technique reinforces the horror of living with dementia but also serves to develop the plot and to mask or suggest clues as to the reality of the situations that are being described.

So closely did I identify with Jerry’s plight that I had to fight with myself not to turn to the last page to find out what actually happens. I stopped myself and as a result read compulsively and very rapidly, so that I could reach the denouement. This is a novel that would have benefitted from several alternative endings, each of which could have been very fitting. The actual ending was satisfying but was it twisty enough? Read the book and see.