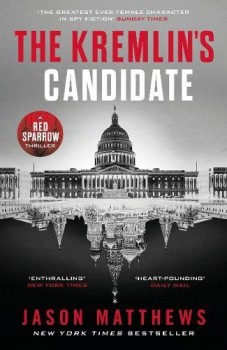 Double agent Dominika Egorova will lose her love and her life unless she can uncover a Russian mole who may become America’s most senior intelligence operative.

The final part of Jason Matthews’ thunderous and compelling Red Sparrow espionage trilogy is both contemporary and timeless – an espionage tale full of nail-biting suspense and eroticism that takes the reader beyond the headlines of what has become the second Cold War.

But behind the fireworks, the exacting tradecraft, often horrific violence and the sex, this elegantly written and self-assured story lacks the impact of the first two parts, Red Sparrow and Palace of Treason. There are unfortunate contradictions. Synesthete – one of those very rare people who ‘sees’ people’s feeling and moods as colours – Colonel Dominika Egorova of the Russian counterintelligence service, always described her American lover Nate Nash’s aura as purple. Now it is just red. And a key plotline requires the reader to believe the FSB is unaware Dominika and Nash have previously met – even though in the now-filmed Red Sparrow the service has a huge file on the CIA man who Dominika is sent to Helsinki to seduce!

The ending is James Bondishly unbelievable. Whether Matthews, a CIA operative and ‘denied access’ specialist for more than 30 years, wants the reader to feel espionage is a meaningless game no one can completely win because the price is too high or not, he succeeds in doing so.

The CIA has launched some ridiculous stunts – remember Castro’s exploding cigars – but to make a rendezvous inside, then expect to escape from Vladimir Putin’s heavily guarded Sochi holiday complex stretches imagination beyond belief and the escape method reeks of the latest product of ‘Q’s workshop rather than reality.

Having said all that, this is still a great espionage novel. Matthews writes about what and who he knows. His tradecraft and the cat-and-mouse tension of surveillance and detection alone make this a classic spy thriller. His vividly realised characters on both sides of the new Iron Curtain grab and hold the attention.

And this unreconstructed Cold Warrior is emphatic in his belief that Russia, under its new Tsar, is even more of threat to the West and America in particular, than it ever was under the old Communist regime, particularly through its carefully constructed and often elaborate and quite brilliant disinformation campaigns and cyber attacks.

He reserves most of his ire for the politicians on both sides. The backstabbing and toadying ring of Putin’s inner circle are treated with unanimous scorn, but his real contempt is reserved for those American politicians, prominent under the Obama administration, so dismissive of traditional intelligence work and anxious to halt its sheer nationalistic ‘adventurism’.

Dominika Egorova must balance two worlds. Trained in seduction and deceit at the former KGB’s notorious Red Sparrow school, she must continue to do her job while also stealing Kremlin secrets for her lover, CIA man Nash. A threat from her past threatens both her relationship and her life. A new US administration is selecting its CIA Director against a background of suspicions of a Russian mole in a high position – and possibly even a candidate. If the rumours are true and the mole confirmed in office, the Russians will know the names of all CIA spies operating in Moscow, including Dominika.

Motivated by her desire to clean up her motherland and her hatred of the corrupt Russian regime, she plunges into the Kremlin intrigues, searching for the mole’s identity, while stealing as many of its secrets as she can before her own time runs out.

Matthews’ globe-trotting trilogy has produced outstanding espionage novels. His followers may be disappointed by the final denouement, but if you’re coming to his work for the first time, this is a truly outstanding read.