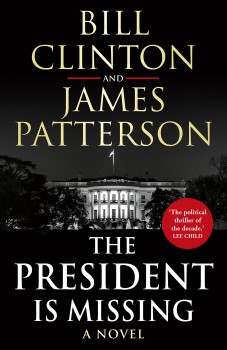 The President is Missing

The United States faces a terrorist threat, and it is up to the President himself to stop it.

The President insists on leaving the White House alone, telling only his Chief of Staff where he is going and what he is trying to do. He makes it obvious that, should he fail in his task, the consequences for the United States will be calamitous.

A simple statistic might help cast some light on the quality of this novel. It is 513 pages long and contains 128 chapters - almost precisely four pages per chapter. To take one example, six of those chapters deal with the President's flight when he and his companion, Augie, come under attack at a ball game. With a slight amount of reorganisation of two very short chapters that come in the middle of this group, they could easily have been written as one continuous narrative.

And the reason they are not? It appears to be the old one that is found in the worst type of cheap thrillers – the desire to include in the narrative as many dramatic (frequently melodramatic) climaxes as possible. Nor is it restricted to those scenes involving action. Even a conversation can be, as it were, interrupted by a chapter ending with a view to giving greater emphasis to what is to follow. It is as if the authors don't trust the reader to respond in the required manner and feel obliged to lend a hand.

In spite of the attention given to plot, there is no doubt that in a part-thriller, part-political novel, the latter is more successful. The purely political figures – Lester Rhodes, the Speaker of the House, and Vice-President Cathy Brandt, the President's chief opponent in the nomination – are vigorously portrayed. She is unable to forgive the man who beat her and seems to be in a permanent sulk. Rhodes dislikes the President intensely and would love to bring about his removal from office. The other political character who stands out is Carolyn Brook, the President's chief of staff. She will carry out his wishes instantly, give advice when required and generally help him to fulfil his role as President. Apparently, Hillary Clinton issued reminders to 'keep it real' and, from the purely political point of view, the authors have achieved this.

The villain of the piece is – not unexpectedly – a terrorist, Suliman Cindoruk, the leader of the Sons of Jihad, an organisation noted for cyber terrorism. He has, however, only a peripheral part in the novel and the assassin, Bach, tends to take over the villain role, although her evil nature – not to mention her prowess with a rifle – is not entirely convincing. The main charge that Rhodes brings against the President is that he gave orders for a group of Special Forces and CIA operatives to prevent Cindoruk from being killed by an anti-Russian militia group in Algeria. It had been his intention that he be taken alive but in the event he escaped. There are other criticisms of the President but it is this one that could lead to his impeachment.

The President, however, knows something that his critics don't know. There is an existential threat to the United States that is to be carried out in a matter of days, perhaps even hours. He knows for a fact that this threat is real and comes to the conclusion that the only possible way in which he can counter it is to take the unheard of step of leaving the White House, disappearing and hoping against hope to find the answers he needs.

The activities of the President after he disappears constitute the greater part of the novel. Of course, the reader never believes for a moment that the plot will be successful and the interest is sustained by the thought processes and subsequent actions of the President as he looks for the best way to foil it. Amidst all the drama, a rather cumbersome ending is something of a letdown. This a patchy novel but it is thought-provoking and leaves the reader to contemplate the possibly devastating consequences of cyber terrorism