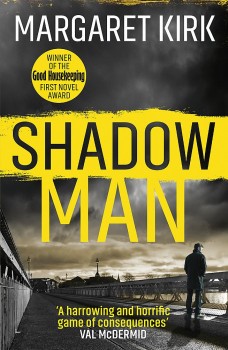 When TV presenter Morven Murray is found brutally murdered on the eve of her wedding, it’s up to DI Lukas Mahler to find her killer.

Morven Murray is a well-known TV presenter, the star of daytime TV. Her sister Anna is a university lecturer and the two could not be more different. Morven is about to get married to former footballer Ross Campbell in a lavish wedding but the relationship between the two sisters has never been an easy one and a series of arguments mars the build up to the wedding celebrations. Morven has a spat with her fiancé and then another with Anna, leaving the police no shortage of suspects when Morven is found murdered in her hotel room the night before her wedding.

The police investigation is led by DI Lukas Mahler, who is still something of a fish out of water in Inverness after his move north from the Met to be closer to his elderly mother. She’s struggling to cope, and is easily taken advantage of by freeloaders under the guise of help and friendship.

The death of a police informant in a gangland-style execution is also occupying Mahler’s time, and his boss wants results on both cases quickly as the press are already breathing down their necks, particularly in the case of Morven Murray. Anna appears to have an alibi for the time of her sister’s death as she had gone out for a drink with Jamie Gordon, an old friend of Morven’s from her time at university. The police have few leads to go on and the ones they are able to follow seem to lead to dead ends.

Shadow Man is Margaret Kirk’s debut novel, although there were times when I wondered whether I’d missed a previous book in the series as I struggled to understand Mahler’s backstory. Kirk certainly stays well away from character information dumps, although a little more explanation wouldn’t have gone amiss, especially when it comes to working out what it was that his father had done to traumatise Mahler’s mother so much and turn her into a frightened recluse, dependent on medication to keep her stable. Mahler’s somewhat unusual name is another thing that remains a mystery.

This is a solid police procedural with a reasonably engaging cast. When TV presenters are portrayed in crime fiction, they often appear as over the top stereotypes, but Kirk avoids that pitfall and Morven Murray comes over as a real person, seen through the eyes of a variety of people, and her death matters. At times it’s hard to disentangle the various threads and for most of the book, I found it hard to see why the supposed gangland killings were believed to relate to Morven Murray’s death. They seemed to be there primarily to set up a thread for future books concerning a shadowy underworld figure known as Mr Hollander.

If there is a sequel, I’m sufficiently intrigued by DI Lukas Mahler to stay on board. This was a strong debut with both heart and style.