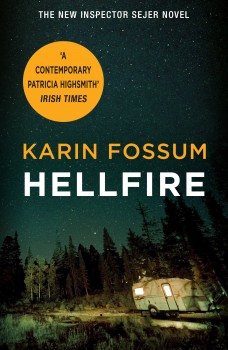 A mother and her five-year-old child are found murdered in an abandoned caravan. Chief Inspector Konrad Sejer believes that the killing has been planned but the initial investigation leads nowhere.

This particular hot August day would remain in the memories of many people for ever. A mother and a five-year-old child are found in an old dilapidated caravan on a remote piece of land. A single bloody footprint and a sharp knife left at the scene are the only clues to this gruesome murder, and nothing of value has been taken.

The farmer owning the caravan, his family and four Polish season workers are questioned, all of them numb from shock. However, Chief Inspector Konrad Sejer is convinced that none of them could have been capable of the premediated killing. The investigation follows the usual course but nothing important comes to light, apart from comments in passing of the sighting of a red car and a man dressed all in black. Following the required procedures, a simple and sad funeral is held. On the day an encounter of the dead woman’s mother with a stranger suggests to Sejer that the quiet and uneventful existence of the victim holds some deep secrets.

Rewind some months back and a twin-strand story develops, focusing on lone mothers and their sons. Bonnie Hayden dotes on her son Simon, an insecure little ray of sunshine in her otherwise monotonous joyless and back-breaking life as a home help, cleaning and caring for very demanding clients. Occasionally Bonnie works with lovely people who really appreciate her. Yet somehow she seems to take her current situation as a punishment for what has happened before, and is still deeply hurt by the break-up with Olav, Simon’s father.

Meanwhile, another mother, 56-year-old Mass Malthe looks after her 21-year-old son Eddie who is set in his own peculiar ways: overweight, unemployed and not fitting within the society, and fascinated by death. Their co-dependency relies on the safe and unchangeable daily routines, until Eddie decides to look for his father who had left the family years ago and moved to Copenhagen where he had died. Writing to the television show called Tracker Tore to ask for help in finding him yields no results so Eddie pesters reluctant Mass until she gives in and gives him the name of his father’s new wife. When Mass suddenly became very ill, she finally confesses that Eddie has been adopted. His obsession with finding the truth explodes in the most unexpected and dangerous way.

Karin Fossum’s emotional intelligence and subtle analysis of the human nature are the main features of the Inspector Sejer series. The man himself brings calm and reassurance to all those around him, both colleagues and the victims of crime. Years of experience and an inquisitive mind have helped him to assess each crime scene and the perpetrator accurately: ‘He had without a doubt some behavioural disorder, although that would not necessarily be apparent to those around him.’ Otherwise, how else can you deal with the evil around?

The author’s compassion and need to understand how people’s circumstances shape their lives and choices they make, and what makes them follow certain paths is fascinating. She focuses on ordinary people, and doesn’t judge or present opinions, but instead delivers a story in such a dramatic yet understated manner that each book is a delight to read, and Hellfire, beautifully translated by Kari Dickson, is no exception.