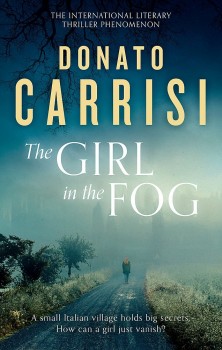 The Girl in the Fog

A psychiatrist is called in to a police station to interview a man after a car accident. Meanwhile, a young girl is missing from her family who live nearby.

A well-known detective has a car accident in a remote mountain area. As a precaution the local police ask a psychiatrist to interview him to ascertain whether he is telling the truth about the accident, as there are some suspicious circumstances. The area is already reeling from the disappearance of a local schoolgirl. The detective is the person who has been leading the investigation into the missing girl, which is why he is already known to the police.

One of the things that make this psychological thriller unsettling is the way in which the chapters are not necessarily sequential. Just when the reader thinks the plot is running smoothly there is a change of date and a different but connected storyline emerges. Whilst this changing around can be annoying it is a very effective ploy for keeping the reader off-balance.

Indeed, the great strength of the book is the plot. It is just so clever that I was kept guessing right until the end, getting drawn innocently down many cul-de-sacs on the way. There are question marks over who in the story is trustworthy. It might be the very religious mother; or the father, who seems to have something he wants to tell someone; or maybe even the teachers at the school; or members of the religious sect to which so many of the villages belong. The question is whether anyone is trustworthy, and whether the people who live in such an isolated village live by the same social norms as everyone else.

The atmosphere of an isolated village in the mountains is very well drawn. People who are very self-sufficient and who live their lives privately behind their own front doors can be common in such a place. And as could also be likely, religion plays an important part in their lives. In this case, many have become reliant on a religious sect. There is another secret too that many are keeping. This is to do with the sale of land. The different amounts of money that people receive could have made a real difference to their lives but many cling to what is familiar, fearful of change.

The story is unusual in the way it focuses on manipulation. In particular, it focuses on the way in which the detective who is managing the investigation into the disappearance of the missing girl manipulates the media: whether manufacturing searches to produce good TV images or creating places to which people from a wide area will come to pay their respects. Nothing is straightforward.

Clothes, too, are used to create atmosphere such as the way a cardigan is pulled around the wearer who feels vulnerable or the way a young girl dresses as a Goth. Sometimes it is the very clothes that are worn, such as the shapeless tracksuit worn by the errant wife, or the excessively smart clothes worn by the detective to make him stand out above the local villagers, or the stereotypical clothes worn in school by the English teacher. Each time the clothes are a means to establish a character trait of the wearer or a way for the wearer to influence other people.

Overall, The Girl in the Fog is an unsettling book, especially because of the isolation, the fog and the atmosphere of suspicion.