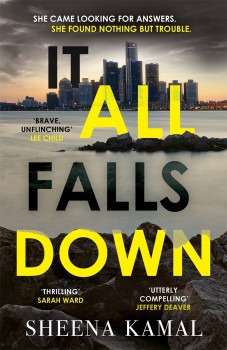 It All Falls Down

Nora is looking for answers to her broken past. She doesn’t realise Detroit, where the questions take her, is a desperate city that will break her even more.

Nora doesn’t do commitments other than Sebastian, her friend who is dying, and Whisper, her dog. In fact, she lets most people down and leaves a trail of catastrophe in her wake. She even lets herself down when she accuses the man in the park of stalking her; she has lost her ability to sense a lie when she hears it and can’t decide if he is telling the truth about being a veteran who knew her father. But his story is intriguing enough to send Nora away from her hometown of Vancouver to Detroit on a hunt to find out what really drove her father to commit suicide, leaving her and her sister orphaned.
Detroit has answers, but those answers are shrouded in more questions, and at every turn the darkness that is the once-vibrant city threatens to consume Nora. She should return to Sebastian and Whisper before it is too late. But she can’t. Not until she knows the truth.
This is the second in the Nora Watts trilogy. I reviewed the first last year and didn’t like the main character at all. As much as flawless main characters give me toothache, ugly characters without any redeeming features do nothing to entrance me either. My closing thoughts on the first Nora Watts book were that I hoped she evolved in the second.
For a while I thought she had. The story starts with Nora living with her friend and former employer, Sebastian. He is dying of cancer, and she is shielding him from the world, respecting his privacy. Nora even has a more outward affection for her dog. But then the leopard’s spots reappear. While there would not be much of a story without her trip to Detroit, my initial hope for this woman’s evolution dissolves when she makes only cursory attempts to keep in touch with the dying man. Even though there are hints of compassion in Nora, and she is managing to abstain from alcohol, the continued labouring of her unpleasant traits makes it difficult to like her. She is still unhygienic, anti-social, aggressive, rude and a self-serving people-user. That said, I accept Nora now, simply leap-frogging certain paragraphs of her bleak introspection.
The plot is complex and more plausible than the first book. It is a heady blend of a familial mystery and drug-infused gang revenge. And Kamal certainly knows how to paint a vivid backdrop. I closed the book under no illusions about the darkness and desperation of Detroit as a city, as a people. She creates atmosphere, a degree of suspense (even though the outcome is predictable) and there is plenty of action that is believable in the context of a broken city. It is a shame that the author doesn’t seem to realise the strength of her voice; instead she labours points, observations, introspections as if she is worried she hasn’t relayed the message. This slows the otherwise excellent pacing and comes across as trying to be unnecessarily literary.
Unfortunately, there are, as with Eyes Like Mine, a few too many conveniences and lucky moments which have a way of shattering the suspension of disbelief. However, Kamal has clearly mapped out the three books, and although many will know instinctively the plot and outcome of the third story, I think we will also be pleased with the way this author pulls all the strings together at the end and ties them into a neat bow. Her quality of writing points to this sort of attention to detail.
Perhaps the reader will also get the bonus of seeing Nora cleaning up her act and showing a little humanity.