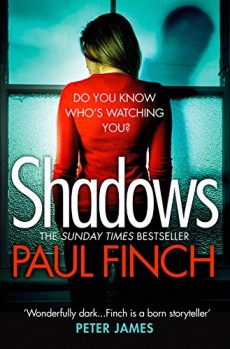 DC Lucy Clayburn’s father is a key figure in organised crime in the North West. Her career will be in trouble if this gets out.

DC Lucy Clayburn’s first appearance was in Strangers, but don’t be put off if you have not yet read that, because this book stands alone. She has a secret – one which is a major problem for a female police officer working in the tough areas of Manchester.

Someone is targeting the criminal masterminds of the area. They are being attacked in their own environment and brutally assaulted or killed. The attacks appear very systematic and, of course, involvement with the police is uncomfortable in such circumstances.

This discomfort is made much worse for Lucy because the man who fathered her and left her mother before she was born is actually one of the major criminal leaders in the area. Lucy met him for the first time in the previous novel and is determined to have no contact with him at any cost, but this vow proves impossible to keep in the current circumstances. Lucy also has to call on another aspect of her shady past, her relationship with the leader of a biker gang. All of this is not what a successful DC needs or wants.

Paul Finch has a very engaging style of writing. He paints vivid cinematic images of the areas of Manchester frequented by the criminals and the police. His characters are believable and engaging, if not always likeable. Lucy’s mother is an interesting character. Clearly she has a checkered past and now she lives alone and has a strong desire to protect her successful daughter from the criminal world.

In the first part of the book the pace is a little slow and sticky. It feels as if the author is coming to terms with managing the continuity of the series, but stick with it. The pace develops, the plot thickens and the action, particularly the action regarding Lucy, becomes fast-paced and exciting. It’ll be interesting to see what’s coming next in the shady world of DC Lucy Clayburn.