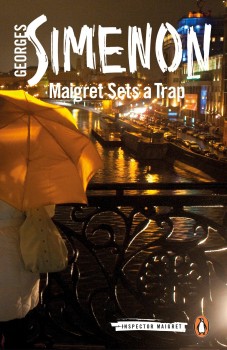 The investigation into a series of five identical murders, all women and all in the Montmartre arrondissement, has stalled. But Maigret now has a plan that he hopes will move the investigation forward.

There have been five identical murders, all women, and all in the Montmartre arrondissement. The first had been carried out in February and the latest in July. There does not seem to be any reason for the killings to cease and everybody is expecting another any day. Maigret  is almost bereft of ideas and decides to convince the press – the killings are never out of the news – into thinking that a suspect has at last been arrested.

The idea had come to Maigret as a result of a discussion he had had with Professor Tissot, director of a psychiatric institution, who was often called upon as an expert witness in court. His theory was that serial killers feel themselves humiliated by people who regard them as mediocre or incompetent. He admitted that he doesn’t know what it is that causes such people to become multiple murderers, but feels that it is an essential self-assertion, a feeling of offended pride.

Maigret and the professor agree that, were the killer to be convinced that somebody was to be arrested for the murders that he had committed, that pride might lead him to kill again to prove the police wrong. Maigret can see that a trap of this nature runs the risk of provoking another murder which might not otherwise be committed, but he feels that, if the killer is ever to be caught, it is his best course of action.

The conversation with the professor that leads to Maigret’s trap is very convincing without being in any way confusing and is interesting in itself. Whether the circumstances responsible for the series of murders constitute an adequate explanation – one that a professional psychologist would accept – is possibly debatable. There is, however, no doubt that in the context of the novel it rings true.  The detailed description of the trap Maigret sets is convincing, particularly in the use it makes of female police officers. There is real drama in the writing when the plan has been put into operation, the necessary arrangements made, and all that the police can do is wait and hope that the bait will be taken.

We are told in a number of other Maigret novels that his chosen career, had family circumstances permitted, would have been that of a doctor. From what we learn in this novel his branch of specialisation would have turned out to be psychiatry. Certainly, the way in which his mind works, suppressing anger and seeking answers - particularly in this novel - would have qualified him for such a role.