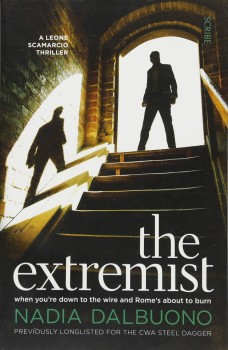 A hostage situation is in progress in Rome and one of the terrorists asks to see Detective Leone Scamarcio in person. Scamarcio then has to find something and take it back before the deadline for the hostages to be killed expires.

Detective Leone Scamarcio is suddenly summoned to a cafe in Rome in which the customers are being held at gunpoint by a group of young terrorists. Their leader has asked to see him in person. He has a theory and needs Scamarcio to go and find a buried DVD and bring it to him before the deadline at which they will kill the hostages.

Scamarcio begins to go to the address he has been given but before he gets any distance he is stopped, required to get into a car, and taken prisoner. This then is the pattern that follows him again and again as he tries to carry out this dangerous errand. It seems that everyone in the world is trying to prevent him from getting back to the hostage site.

The books explores the mindset of some young so-called terrorists in Rome. However, whilst the main thread of the plot is realistic, the detail is somewhat far-fetched at times. For example, as Scamarcio undertakes his mission, people seem to appear out of the blue just at the right moment to rescue him from yet another arrest, and it’s hard to understand how he ever survives all the different physical beatings that are thrown at him. Credibility is certainly stretched at times. Having said that, there are also some real gems hidden in the text, for example the young man who helps the detective to convert the DVD to something that he could view on a laptop is so realistic – the IT familiarity of such young people is portrayed well.

In general, the writing flows and the plot ensures interest is maintained right until the end. The story is set within a finite period of time and there are some vivid descriptions of how time drags yet passes in the hostage situation from the point of view of those inside. Suspense is created at times through quiet actions and glances.

Particular characters are well drawn: the Chechen man, a mysterious person described through descriptions of his clothes and a few of his actions; Basile, the Mafia man, summed up by his continual looking for the benefits of helping Scamarcio, and Ifrid, the young terrorist, who at the start plays a dangerous role for particular reasons. Scamarcio constantly pursues truth and this is the strength in his character and ultimately why people believe in him.

The whole story is set in Rome and Scamarcio travels to some of the outer suburbs that are more often off the radar. He travels around on motorbikes, on the back or at the wheel, and therefore sees things at ground level, providing the reader with a wonderful view of some of the less-known areas of the city. His exploits make for a compelling read with the action always against the clock.  This is another successful, but quite different, story – the fourth – in the series.