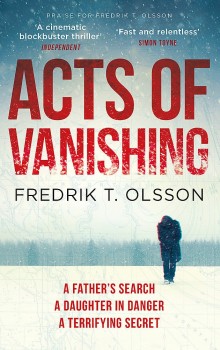 The man facing his own catastrophic end on a Swedish rail track will never know that his death would hardly make the news. The residents of Stockholm will never know of his connection with the power-cut that sweeps the city minutes later. Sara Sandberg knows deep down why her parents had barred her from the family home, but she will never know that William, her father, has been looking for her for months, losing his wife and job in the process. And now it is too late, because Sara is about to die.

William waits at the railway station, unaware that the world is under threat and his daughter is involved, and unaware that the black-out about to happen will mark the end of all meaning in his life.

Perhaps it is the Northern Lights, maybe it is the long, dark Swedish winter nights, but there is definitely something up in those Scandinavian countries that sprinkles fairy dust over its authors. Although it is not perfect, Acts of Vanishing can hold its head high amongst the other Scandi crime books on the shelf. It comes with a fascinating premise, bordering on science fiction. Had I known about the sci-fi aspect, I may not have picked up the book, but I am so glad the first few chapters hooked me in.

Written in the third person past tense, this could have been a book that lacked a point of connection. However, the detail and introspection made it easy to not only like William, the protagonist, but also to feel his urgency, his despair, his fear. He is a flawed character with anger issues, but he has his reasons. However, there are other important characters, including his nearly ex-wife, Christina, and Sara, his daughter. Surprisingly, I connected with them too.

There are many other players in this complex story, and although they are less well developed, the reader may find themself questioning them all as the international threats to people, cities and even countries grow.

It is impossible to go into the story without revealing too much. Suffice it to say, it is knotty, gritty and although it hops from country to country, the portrayal of milieu is more than sufficient to ground the reader in the international journey. However, at times I found the attention to detail slowed the pace, and I am certain that much could have been removed in editing without destroying the story.

Although the reveal is disturbing, even terrifying, it also feels like a missed opportunity, and the climax lacks fireworks. Olsson could have been writing this for a male audience, but I am certain that most female Scandinavian crime fans will love it too, even those who are not sci-fi fans. There are no little green Martians, but the story does touch on the not-yet-experienced, I hope! Acts of Vanishing is a visual, film-worthy, high-tensile book with shades of Harrison Ford as The Fugitive.