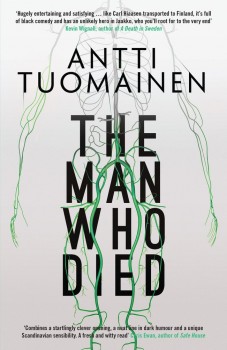 The Man Who Died

Jaakko Kaunismaa, a successful entrepreneur in the mushroom industry, is told that he’s been poisoned and hence on the verge of death. He decides to find his own murderer.

Jaakko Kaunismaa is a successful, easy-going and happy entrepreneur in the mushroom industry, living in a stunning part of Finland, close to the generous forests, and married to the beautiful Taina, famous for her incredible culinary skills. He’s full of ideas to expand the business which is run by trustworthy employees who became his good friends. The established contacts with the Japanese clients who can’t get enough of the sensationally good matsutake or pine mushrooms keep getting better. Even brand-new competitors appear to be manageable. It’s summer, and the forecast rain is just about to boost the mushrooms harvest.

Life couldn’t be more perfect. Except for a tiny detail: Jaakko’s health hasn’t been as great as he had hoped, notwithstanding a diet rich in cream, salt, sugar and heavy sauces, and he finds out that death is imminent. His doctor tells him that he’s been exposed to toxins over a prolonged period of time, and to put it bluntly, someone has been poisoning him, hence the irreversible changes in his body.

As a shocked and devastated Jaakko returns home to inform his wife, he sees her fully engaged in an extra-marital situation with a young employee Petri. He has his first suspect, the first potential murderer. Although he might also be targeted by the competitors: Asko, Tomi and Sami whose premises he visits while the owners are away. Accidently of course. The three men take an instant dislike to him, resulting in Tomi attempting to kill him with a Japanese sword.

The mushroom king is determined to conduct own investigation to discover who’s been poisoning him so effectively that no antidote can stop or reverse the process, and he becomes reckless and bold, suspicious of everyone and at the same time enjoying each moment to such extent that two litres of sugary Coca Cola and huge portions of ice-cream seem to be the only methods to ease contradictions buzzing in his head and the side-effects ravaging his body.

The roller-coaster of unbelievable coincidences, mishaps and accidental deaths follow, each more ridiculous than the previous and Jaakko in the centre of growing chaos explains this: ‘I can’t really blame myself…I’m not accustomed to hiding bodies and destroying evidence.’ No one really is, and that simple statement only adds to the poetry of the whole novel. Jaakko evaluates his entire life as he prepares for his impending demise, and tries to find the murderer as he already considers himself dead. He also realises what’s most precious in his life.

The use of dark humour and placing the main character in the hilarious circumstances demonstrates that a novel about death and murder can be funny and sad, entertaining and philosophical. ‘Everybody should die at least once, if only to see how beautiful the morning can be.’

The Man Who Died in David Hackston’s translation might not be the classic dark and gloomy noir but delivers enough drama, danger and killing to keep you on your toes, and remind readers that the most stunning forest in the middle of summer can hide very dark secrets indeed. Antti Tuomainen again writes about life and love, even if he moves between dystopian thriller, hard-boiled mystery and a study of Finnish habits and ways of life, throwing melancholy, saunas, outdoors and pared-down conversations into the mix. The book is a joy to read, and an invitation to appreciate mushrooms.