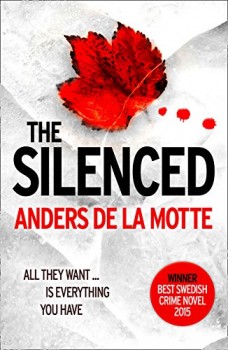 A viciously savaged body is found in the water. Detective Inspector Julia Gabrielsson investigates the macabre case, and gets pulled into a web of political scheming.

Summer. A body chopped into 14 pieces and savaged beyond recognition is found in the waters of a lake outside Sweden’s governing party’s conference centre, used by some very powerful people. After careful forensic analysis it’s only possible to say that it was a male victim, and could have been left there at the end of winter.

The case is allocated to Detective Inspector Julia Gabrielsson, of the Violent Crime Unit. She’s decent, hard-working and honest, and partnered with the newly appointed civilian investigator Omar Amante. Her sidekick seems to have a complex past, including Europol work with the refugees arriving on the Italian island of Lampedusa, strong political connections and personal trauma. While establishing trust they also carry out a preliminary investigation, slowly breaking all possible rules, mainly because of Amante’s methods of gathering information.

The second strand initially revolves around the infamous yet legendary officer David Sarac, a man haunted by demons, now locked in a high security mental institution where every single night he relives events on Skarpö, an island in the Stockholm archipelago, and tries to accumulate enough sleeping pills to end his own life. A violent showdown between police and rival gangs, resulting in nine people dead, two of them from the police, were a direct result of his actions several months earlier. Anxious Sarac, a handler of informants and suffering from PTSD receives an offer he cannot refuse, and decides to run away.

The construction of the novel indicates that these two strands seem chronologically unconnected until Julia realises that the victim could have been Sarac. And from that point the author adjusts the timeline which makes it clear that The Silenced closely follows explosive events in MemoRandom.

However, that doesn’t mean that two books cannot be read out of order. Rich detailed background in the sequel provides enough juicy information to formulate a clear view of what has been going on, how the past events affect the current dealings, and that intrigue and desire to get to the top of the power tree rule this corrupted world.

Jasper Stenberg, the Minister of Justice, is as unscrupulous as before, with the added nightmare of guilt following the death of his lover Sophie, who was the daughter of his mentor John Thorning. His apparently loyal but dangerous ally Oscar Wallin keeps plotting, as he has been sidelined to become a Police Commissioner. Stenberg’s wife Karolina and father-in-law continue to manipulate situations and people to achieve their own goal which is essentially pushing Stenberg into a post of Sweden’s Prime Minister.

Gabrielsson and Amante are unaware of the tangled web of political figures, corrupted policemen and ruthless crime lords as they track people connected to Sarac: his carer Natalie Aden, and Atif Kassab, the ex-Iraqi police officer and now the police-murderer behind the bars. Then after a massive blunder the pair must continue their work undercover.

If you want a complex, unsettling and tense thriller then The Silenced, flawlessly translated by Neil Smith, is for you. Nothing at all is at it seems, and the layers of deception and conspiracy are tightly intertwined. Anders de la Motte’s greatest skill, apart from telling an excellent gripping story, is creating deeply flawed interesting characters. Not even one is portrayed either as black or white. The range of grey shades is enormous, and affects everyone who fit perfectly into a world of political machinations and psychological games.