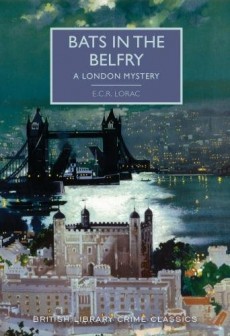 Bats in the Belfry

A group of successful professionals jokingly share ideas on how to commit the perfect murder. When one of them disappears under mysterious circumstances Chief Inspector Macdonald is called in.

Some women writers of the Golden Age preferred their work published under male pseudonyms – Lucy Malleson appeared as both J Kilmeny Keith and Anthony Gilbert – to give the stories wider ‘appeal’. The prolific ECR Lorac, real name Edith Caroline Rivett, generally known as Carol Rivett, was one of them, producing more than 70 novels over a career spanning more than a quarter of a century, although later she re-assumed her own sex, publishing as Carol Carnac.

She shunned any form of personal publicity and despite being elected a member of the prestigious Detection Club in 1937 – the year this story, generally regarded as one of her best, was published – she quickly fell out of fashion after her death in 1958.

Now the British Library, as part of their policy of re-introducing readers to the work of some of the lesser-known authors, have re-issued this shrewd, intricate, atmospheric and surprisingly light early procedural.

At drinks after the funeral of a relative, a typical group of comfortably off London literati, a freelance journalist, author, playwright, actress, investor, artist, debutant – the equivalent of today’s Notting Hill set – fall to speculating on the way to commit the perfect murder.

The author, Bruce Attleton, has dazzled the literary scene with his first two books, but his talent has failed and he lives off the earnings of his successful actress wife. Sybilla is unforgiving of his failure and the couple lead separate lives at their Regent’s Park home. When Bruce disappears on a surprise trip to Paris, and his suitcase and passport are found in a sinister artist’s studio in a crumbling house in Notting Hill, Scotland Yard’s Chief Inspector Macdonald is called in.

London of the 1930s is superbly evoked. The Notting Hill settings are really accurate and the atmosphere of the decaying Victorian Gothic house is well done. Rivett’s prose is descriptive and easy to read and she uses her skills to bring into play an assortment of characters and weave them into an intriguing plot – where at first no one is quite sure what the crime really is and later, once a body is discovered, whose it is.

If there is to be a criticism, it can be her tendency for Wodehouse-like ‘Oh I say! Golly gosh!’ young people, too good to be true young men in the shape of the inquisitive journalist and the downbeat character of Chief Inspector Inspector Macdonald.

Macdonald, like Rivett’s other police protagonist Chief Inspector Julian Rivers, has almost no personality at all. The most memorable things about him is that he is Scottish – and even the author forgot his name, which started off as James and in later books changed to Robert!

What he is though, like Freeman Wills Croft’s successful Inspector French, is a decent, quiet persistent copper whose methods have a feeling of authenticity. He rarely works alone, heading a team, all allocated tasks and responsibilities suited to their rank, so the reader is given a clear picture of the painstaking detection behind Macdonald’s brilliance.

This is a good excellent early example of the procedural, with enough amateur detection from the ambitious young freelance to make it fun and as with so many Golden Age stories, a romantic sub-plot.

The plot is nicely convoluted, involving murder, possible blackmail, family secrets and adultery and can only be unravelled by conscientious fact-checking, following suspects and skilfully interpreting forensic evidence.

Rivett is wonderfully descriptive in the way she highlights the ancient and modern jostling side by side in London, and the Belfry itself is a spooky place, described with some nice spine-tingling touches of horror. All in all, this is a fine example of its age and genre – and a serious and well-written work from a writer who deserves to be brought to the attention of modern readers.