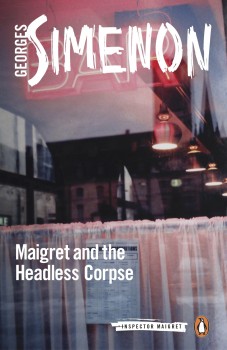 Maigret and the Headless Corpse

A dismembered body, found in the Canal St-Martin, presents Maigret with a thoroughly baffling case involving a taciturn woman. And the examining magistrate wants quick results.

Two boatmen, having overloaded their barge, are finding difficulty in getting through a lock on the canal. As they struggle to push the barge off they find that something has become entangled in the propeller. It turns out to be a man’s arm wrapped in a newspaper.

The news of the find reaches Lucas and Janvier in the office at 7 o’clock in the morning. It surprises them because, whilst a dismembered body is occasionally found in the canal, never before has it been that of a man. Normally it turns out to be a low-class prostitute who had been out late at night.

When Maigret receives the news at home he decides to walk to the lock and asks for Lapointe to meet him there. It isn’t long before the diver, who had been called in by the police, finds other parts of the body, but not the head. Clearly it has been disposed of elsewhere in order to cause a problem with identification.

Then Maigret has a slice of luck that puts the investigation on the right track. He is with Lapointe in Popaul’s bar near where the limb was found and wants to make a call to the prosecutor’s office. However, the bar lacks a booth, the phone being simply on the wall, and, since he wants to ensure the call is private, he and Lapointe go in search of a bistro with a private phone booth. They find one further along the canal bank and the woman behind the bar turns out to be important to the case.

Maigret has never met anybody quite like her. She gives the impression of having once been very pretty but now she appears to him totally weary, almost oblivious of what is going on around her. Nothing seems either to please or displease her. She answers Maigret’s questions instantly, almost mechanically, and never gives any more information than the question requires.

When he finds out that her husband is missing Maigret becomes interested and begins to question her further, having discovered from other sources that her husband goes out every afternoon – giving her an opportunity to entertain men in her kitchen. She willingly admits this and appears not to be in any way ashamed of it. When she tells Maigret that her husband is away ordering wine his interest in her increases, as does his curiosity that she could be so world-weary.

This is one of those Maigret novels in which there is little action and where the interest lies primarily in the psychology of the people involved. Maigret somehow feels that he can do something to help the woman and there is just a suggestion that he might be romantically involved.

The story that eventually emerges is quite unexpected and utterly sad. Not unusually in a Simenon novel, we find young disappointed dreams leading to a gradual disillusionment with life as a whole. People go through the motions of living but there is no joy, nothing in which they can rejoice. Life is empty but, unfortunately, it goes on.