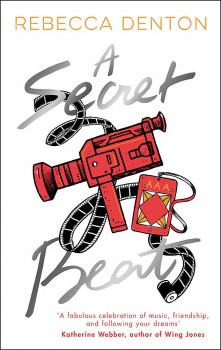 Alexia Falls chucks in a chance of college in the US to follow her heart to London and take an internship at a production company. But money worries lead her down a dangerous path.

Eighteen-year-old Alexia Falls wants to make her own way in life. She’s fed up of running around after America’s celebrity boyband The Keep and working for her father’s record label. Her parents want her to go to college, but Alexia has other plans. She’s been offered an internship in London with Bright Star Productions and prefers the idea of independence to being tied financially to her parents’ apron strings.

Against her parents’ wishes, Alexia goes to London and sets herself up in a bedsit, not caring that it’s costing her a fortune and is actually pretty grotty. Her connections help ease her way into Bright Star and she soon makes herself invaluable, quickly eclipsing her fellow intern Greta in everyone’s eyes. Despite that, Greta is keen to make friends with Alexia, and even keener when an opportunity comes up for her to meet Lee, one of the stars of The Keep, who arrives in London amidst a flurry or rumours that the band is on the verge of a messy breakup.

Alexia and Greta both have their secrets. Alexia is fast running out of money and is too proud to turn to her parents for help. Greta secretly runs the top fandom social media accounts for The Keep and is always on the look-out for more information on the band. When secrets start leaking, friendship is stretched to breaking point and accusations start flying around in the volatile world of the music industry, leaving Alexia increasingly exposed as she plays a dangerous game, capitalising on things that only someone close to The Keep could possibly know.

Rebecca Denton paints a detailed and all too accurate picture of the obsessive world of music fandom, where fans will camp for days outside hotels in the hope of catching a glimpse of one of their idols. Every snippet of gossip about the band is poured over obsessively, and where romance is concerned, it’s a case of light the blue touch paper and stand well back, as the fireworks are likely to explode messily.

Alexia is very much an innocent abroad when she arrives in London, unwitting throwing money around like confetti. It’s hard not to warm to her complex mix of insider knowledge, enthusiasm, and financial naivety. Greta is equally likeable and there are some excellent scenes with the eccentric, deliberately outrageous grandmother.

The insights into the behind-the-scenes workings of a production company are laden with insider knowledge, bringing both the setting and the characters vividly to life. Investing a fictional group with the glitz necessary to have fans clamouring for more isn’t easy, but Denton manages it, and A Secret Beat reminded me of Chris Russell’s accurate picture of bandom in Songs About A Girl and has the same insider’s authenticity that only an intimate knowledge of the music industry can bring.