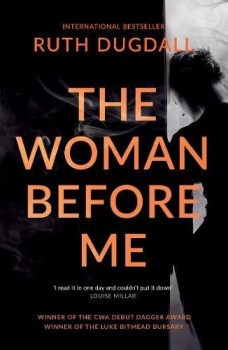 The Woman Before Me

Loss has followed Ruth Wilks since her childhood: her mother committed suicide, her father put his own needs before hers, her beloved aunt died. And then she found Jason. But he is as damaged as Rose, and she can only ever have a small part of the man she loves. Joel should be the making of them, yet he is taken from them when he is only a few days old.

And now she has lost even her freedom, incarcerated for the manslaughter of her friend’s baby; a crime she swears she didn’t commit. As her parole meeting approaches, she bleeds her heart into her Black Book Entry. Meanwhile, Cate, her probation officer, must decide if Ruth is ready for release. If only Cate knew about Rose’s personal prison – her mind.

I love psychological thrillers. I adore their dark ambience. I gorge on unreliable narrators. Unfortunately, my frequent exposure to untrustworthy characters means I often work out the ending long before I should. The Woman Before Me is no exception, with the exclusion of one twist, which sadly I felt was unbelievable having got to know Rose intimately. That said, the quality of writing, the excellent pacing and the attention to detail far outweighed my momentary disappointment in Rose’s out-of-character behaviour, revealed in the final pages.

Rose is flawed. She incites an array of emotions in the reader, ranging from sympathy to disgust, with everything in between. She is a victim of life and death. She exists rather than surviving or living. She portrays herself as desperate and ugly; a growing trend in psychological thrillers, and one that can make it difficult to connect with the character. Her voyeuristic tendencies smack of Rachel in Girl On The Train, but she has a magical je ne sais quoi that I found lacking in Rachel. At times I hated Rose, but her story is addictive.

Rose’s Black Book Entry, written in the first person past tense, serves as background in the initial chapters. It teases us with facts about her early life and later trickle-feeds the events leading up to the death of Emma’s baby. However, the story starts just before Rose’s arrest, written in the first person present tense, as are many of the Rose scenes, and that immediacy draws the reader in. Cate’s chapters comes as a shock with the third person point of view, and a lack of intimacy.

Jason, Ruth’s partner, is pathetic, self-serving and most of us would have kicked him out after his first admission. He and Emma, Rose’s only friend, are less well developed on the page. And surprisingly, Cate is a flat character. It was only when I read afterwards that this is the first book in a series with Cate as a recurring character that I mentally elevated her from almost a secondary player. She certainly didn’t move me in the same way Rose did. The other characters are incidental, but useful for plot advancement.

Dugdall portrays the prison milieu from experience, and the reader senses that. Her intimate knowledge comes out in gloriously ugly detail. And her depiction of Rose’s dreary homes along with Emma’s comparative luxury gets the same consideration.

The Woman Before Me is a re-release, well enough written that I am hungry to read further already published books in the series. It is bleak, and if the reader takes it to heart, a thoroughly depressing journey on a side of the tracks most of us are grateful to only see second hand. It is a fast, easy and enthralling read, with an almost believable ending.