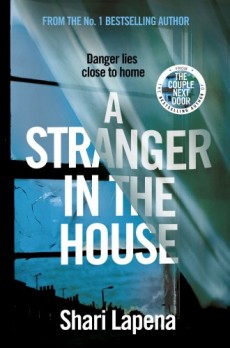 A Stranger in the House

Karen drives her car into a lamppost, late at night, in a seedy part of town, but she cannot remember why she was there. The police are suspicious, her husband disbelieving, and her best friend is behaving oddly.

Karen runs from an abandoned restaurant, late at night, in a state of panic and she drives headlong into a lamppost in a seedy part pf town. She comes to in hospital, with no memory of the events that led to her accident.

Her husband Tom had returned home to find the house empty, like the tales told of the Mary Celeste, with dinner part cooked and the doors unlocked. He has no idea why his wife would run, leaving the house like this. Opposite lives Brigid, Karen’s friend. Brigid likes to watch what goes on in Karen’s house.

The police are forced to investigate because Karen is charged with reckless and dangerous driving. Meanwhile, in the background, the reader is made aware of developments in the abandoned restaurant. With no valid explanation of the circumstances, Tom becomes increasingly suspicious about what his wife has been up to. Brigid’s marital relationships are explored and her behaviour becomes increasingly odd.

This is a story about trust and lack of trust, a consideration of how well people actually know each other, and how people can present an image that they create for themselves. The plot is well crafted. The main protagonists have personalities that are well developed and, as the layers of past lives and experiences are peeled away, motivations and actions are suggested in a satisfying way which leaves the reader with more information but no answers.

The atmosphere created is evocative, the superimposition of sordid secrets and behaviours onto suburban life, is effectively portrayed, giving a grimness to the disintegration of the relationships between the main protagonists. I found my loyalties to the different characters changing as the book proceeded. There are times when I felt sympathy for each of them but this changed as each new facet of their life was exposed.

This is a satisfying, simple read. well plotted and presented in an interesting manner.