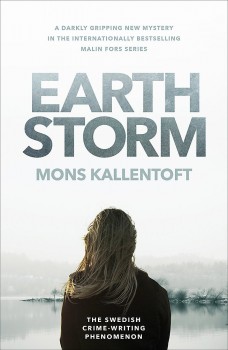 I have read and enjoyed several of Mons Kallentoft’s novels, each dealing with issues in modern Swedish society and featuring Linköping's best detective Malin Fors, a truly unforgettable character. Each brings new challenges that represent the ever-changing world shown through the prism of a small provincial town.

Malin is one of the most interesting and complex female heroines and one of the best fictional detectives; however, her life is a constant battle against the cruelty of the universe, loneliness, alcoholism, doubting herself as a professional, a mother and an individual. Occasionally she allows herself to relax and to be loved by a brilliant journalist Daniel. Their nuanced relationship is very sensitively and thoughtfully portrayed.

In Earth Storm she needs to investigate the shocking cases that appear to be linked by the issues of racism, freedom of speech and the meaning of words.

Firstly, one early morning a dog walker discovers the naked body of a young man lying in a ditch next to a canal. He is soon identified as Peder Åkerlund, a former Swedish politician, excluded from his party for racism. Since then he had distanced himself from the party and his previous opinions, and turned to loudly preaching opposite views. No visible signs of violence are surprising until a post-mortem establishes that Åkerlund was silenced before death: hydrochloric acid had been injected trough his eye directly into the part of brain responsible for speech.

Then 16-year-old Nadja Lundin is reported missing. On return from holiday, her parents realised that their daughter was taken from family’s summer cottage where she had stayed. The place showed disturbing evidence of struggle. Nadja was outspoken but kind, and very involved in environmental and social campaigning, publishing articles on her own blog, condemning the Sweden Democrats and Swedish immigration policy.

When Malin receives cryptic messages and quotes, leading to things like an amputated tongue, she knows that time is against the team and Nadja who might not be dead. An odd sense of calm descends upon Linköping. Under its surface simmers news of the gruesome murder of a right-wing extremist, a missing left-wing teenager and the uneasy relationship between Islamists and native Swedes. Yet instead of feeling fear, the town is deceptively quiet.

Added to that is the personal torment as Malin doesn’t know the whereabouts of her brave strong-willed daughter Tove, who is doing voluntary work in the Democratic Republic of Congo. Malin worries that the place lacks democracy in every sense yet she cannot do anything apart from struggling on with the investigation and trying to believe in a positive outcome in this depressing haunting situation: catching the killer and knowing that people are safe. Feelings of hopelessness and despair affect the whole investigative team, including the new boss Göran Möller. The group consists of well-drawn distinct characters, each with their own issues yet supportive and dependable, whatever the cost to personal lives.

As Kallentoft describes the qualities of a good detective, who “can hear the most muffled voices, see the slightest details, the most opaque connections”, these can also be attributed to his writing style.  An outstanding translation by Neil Smith brings them to English readers. The scenes of torture and gruesome descriptions are horrendous but necessary to depict the thinking behind the killer’s reasoning and actions.