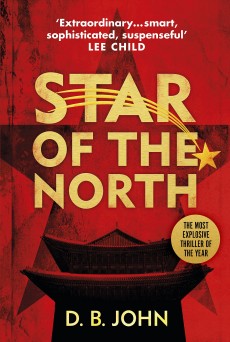 Star of the North

A young black Korean-American woman disappears without trace from a South Korean island. Her twin sister refuses to believe she may be dead and is herself later recruited by the CIA to find the truth and go undercover into the world’s most secretive state.

Current events make this timely, smart, sophisticated and suspenseful tale of family, intrigue and culture in the closed and brutal regime of North Korea one of the most important espionage novels of recent years.

Backed by the fourth-largest standing army in the world, the Kim dynasty has imposed a rule of fear and terror on the North Korean people, who have suffered from famine and a total disregard for human rights. Children were – and still are – sent to a series of barbaric prison camps, possibly for life, for the alleged thought crimes of their parents. Japanese and South Korean civilians were kidnapped, some to teach spies and assassins local slang and dialect, some to have identities stolen, some brainwashed and sent back as agents in place.

A by-product of this scheme, admitted by Kim Jong-il to the Japanese prime minister in 2002, was the so-called ‘Seed Bearing Programme’, where North Korean male and female agents were bred with foreigners and the subsequent non-Korean looking children strictly segregated, indoctrinated and brought up to be agents themselves.

Add to that state involvement in illegal gold, ivory, forged cash and drugs trading, particularly crystal meth, human experimentation using chemicals, summary executions and the creation of a phony ‘Christian church’ – and the truth about North Korea is stranger than fiction.

This is the background which DB John has chosen for what could be a horribly unbelievable story – except that is all based on fact! He has lived south of the 38th Parallel, met many of the defector community in Seoul, co-authored Hyeonseo Lee’s incredible memoir of her escape from the North and used the experiences of gulag escapee Kim Yong as a basis for one of his main characters.

Briefly, a young black Korean-American woman disappears without trace from a South Korean island. Her twin sister refuses to believe she may be dead and is herself later recruited by the CIA to find the truth and go undercover into the world’s most secretive state.

You don’t need to know any more of a completely believable and thrilling plot with some truly marvellous and outstanding characters and plenty of heart-in-the-mouth action, even if part of the denouement stretches imagination.

Think of this brilliant book every time you see on the news that the current dictator Kim Jong-un has issued another threat to the world, ordered another nuclear explosion or launched another intercontinental ballistic missile!