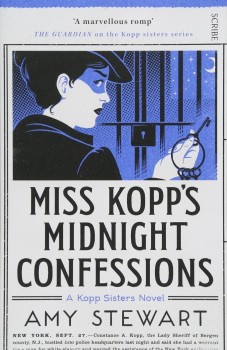 Deputy sheriff Constance Kopp, she of the giant build, outrageous ideas on equality, golden badge and target of a legion of lonely-hearted bachelors, is back in the third of Amy Stewart’s finely researched series that probes an uncomfortable period in American history.

Hackensack, New Jersey, is an unlikely place to start a revolution, but that is what Kopp did, aided, abetted and sometimes hindered by her sister Norma and her own daughter – although she does not know it – Fleurette. The outdated laws – and morals – of 1916, as America teetered on the brink of joining the first world war, saw many young women jailed on dubious charges of waywardness, incorrigibility and moral depravity.

Girls like the eminently respectable, strong-willed and patriotic Edna Heustis, arrested while eating breakfast in a respectable boarding house for young ladies. Edna had left home against her parents’ wishes to work in a munitions factory. The charge against her – waywardness.

Sixteen-year-old runaway Minnie Davis, with few prospects and fewer friends, is a more difficult case. Less innocent, her basic crime is that she ran off with the wrong man and for that she faces five years in a state-run reformatory.

Constance uses her authority, and occasionally exceeds it, to investigate and defend these women when no one else will. But it’s her sister/daughter Fleurette who eventually puts her beliefs to the test and forces her to come face to face with her own ideas of how a young woman should and shouldn’t behave.

Despite some interesting opinions on American involvement in the war, little changes in the Hackensack or the Kopp families. The artistic Fleurette continues to pursue stardom; Constance has her policework and Norma runs the household – and the pigeons. There are plenty of amusing scenes – especially with the domineering Norma – and the story has that feeling of a reunion with old friends rather than something exciting and new.

Stewart has a knack for creating realistic, likable characters – and even newly introduced characters are easy to like by the end. Once it finally gets moving, the plot is predictable, but that still does not make it any the less worthwhile as social comment of the story of a singularly remarkable woman.

Gritty truths are seldom presented comfortably, but always in an intriguing manner. When Fleurette runs away to join the chorus of a touring musical show, Constance must resolve if, and how, she can be rescued without causing scandal. She is brought face to face with a decision involving her own family and not just distant victims of women’s drive for independence, and eventually resolves the issue in her own inimitable style.

Miss Kopp’s Midnight Confessions has strong storytelling, believable characters, often uncomfortable truths and the compelling continuing story of one of the great early characters of the women’s independence movement.