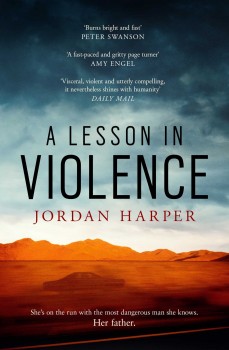 A Lesson in Violence

An 11-year-old girl is unexpectedly reunited with her father, but this is only the beginning for them.

It is not often a book appals me. As a former soldier and crime reporter I believe I am pretty much inured to man’s inhumanity. But Jordan Harper’s visceral, shocking and violent debut story of revenge, gang warfare, corruption and almost every other vice there is has few, if any, saving graces.

Polly McClusky is a loner, smart beyond her 11 years, her only friend an ancient stuffed bear with whom she engages until the toy takes on a life of its own. She lives with her mother and stepfather and has no real knowledge of her convict natural father. She is unexpectedly reunited with him when he arrives at her school, fresh from prison – and already driving a stolen car.

Nate, until then a minor armed robber, is under sentence of death from the head of a prison-based Aryan Brotherhood, one of the major players in California’s drugs and crime world, after killing his brother in a prison brawl. The sentence applies equally to his former wife and child. Nowhere is safe. Nate knows he cannot save both but must take Polly from her quiet existence into a world of robbery, violence and the constant threat of death in order to save her life.

This emotionally wrenching novel overturns long-held expectations about heroes, villains and victims and is a powerful and often shocking study of violent response to brutality and fear.

Nate may hardly be father-of-the-year material, but he is all Polly has left and the development of the relationship between father and daughter on the run is both cleverly and scarily exploited – and an object lesson in the ways love can both brutalise and redeem.

This is not a feel-good kind of book, but one you will remember for a long time. The development of the relationship between father and daughter on the run is well handled, the jumpy almost cinematic prose and changing points of view help flesh out a twist-filled story.
Overall it is the sheer concentration and glorification of violence and its gang/cult/tribe backdrop which sticks in the mind.

Those who praise the book claim rather speciously that Nate and Polly’s criminal acts are carried out in a good cause – as if that somehow justifies robbery and murder – but I suspect many British readers will see this as an awful reflection on a country which seems totally to have lost its moral compass in a welter of greed, drugs, guns and violence.