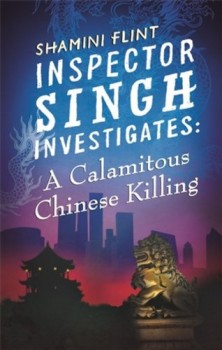 Inspector Singh from Singapore is sent to Beijing to investigate the death of the son of the First Secretary at the Singapore embassy.

Inspector Singh is regarded as something of a loose cannon at home in Singapore, so he is not exactly surprised when he is selected for an apparently thankless task: the investigation of the murder in Beijing of the son of the First Secretary at the Singapore Embassy, Susan Tan.

The official verdict of robbery does not hold water, and there is no obvious way forward. However, Singh has the help of a local ex-policeman Li Jun, who still has one or two contacts on the force, and after interviewing Tan’s husband and daughter one or two promising lines of enquiry emerge.

It seems that both the father and Justin, the son, were involved with development projects in the city, a murky world where the rich and influential scheme for land rights, and current occupants pay a high price for resisting displacement. It is perhaps more than coincidence that Justin’s university professor, Luo Gan, has disappeared …

Inspector Singh is not particularly prepossessing. He’s overweight (probably as a result of his enthusiasm for fiery curries) unfit, hairy, and sartorially less than elegant. These factors, however, together with his lack of tact, and his shrewish wife at home, give him more impact than your regular anodyne detective. And, notwithstanding his handicaps, he proves capable of adjusting to a new and threatening environment and making the most of his deductive skills.

While the oddities of his character mean that Singh carries a hint of absurdity with him, the aspects of life his investigations take him into are not so amusing; in fact some of the most disturbing aspects of life in China today. In the rush to push ahead with building the new economy, wealth distribution has become very unequal. This also applies in the West, of course, but the underdeveloped legal system and the lack of a free press mean that the poor are very prone to exploitation, especially when they occupy land ripe for development.

Groups that threaten the supremacy of the Communist Party, such as dissenting academics, or the falun gong spiritual movement, can suffer extreme penalties. Members of the Party do not always live up to their responsibilities: power corrupts. These matters are very much subjects of debate in China now, and Shamini Flint weaves them seamlessly into her story.

The previous five Inspector Singh novels have taken the portly detective to various locations in East Asia and from this latest outing he shows no signs of slowing down. This is unsurprising: Shamini Flint has a light touch that makes her a pleasure to read. The deft use of telling detail she employs to bring her characters to life contributes a great deal, and the whole adds up to significantly more than might be expected if the book had been judged by its cover.