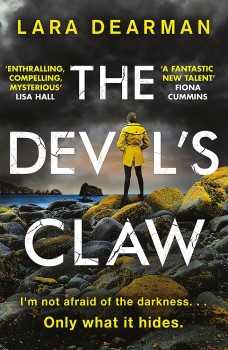 A young journalist returns home to Guernsey, and when a drowned woman is found on the beach finds links to other such deaths stretching back over 50 years.

Jenny left her childhood home in Guernsey to pursue a career in journalism in London, returning home after a double tragedy: an attempt to research the trafficking of woman went badly wrong, and her fisherman father was drowned at sea. Now an reporter for the local rag, Jenny is on the spot when a troubled teenager is found dead on the beach. Suicide is the obvious verdict, but Jenny is interested enough to dig a little deeper.

The local police are represented by Michael, himself no stranger to trauma: his daughter lost her life while at university, and his marriage did not survive the event. At first sceptical, he is later impressed by some of the information Jenny turns up, which suggests that a serial killer has been operating in Guernsey for half a century without anyone realising. With limited manpower, he co-ops Jenny to investigate to the point where he can demand substantive police resources.

The reader is aware that Jenny is on the right track, as occasional short chapters in italics feature a man, unnamed, born of a Guernsey woman by a German father in wartime. His childhood was one of isolation and persecution, resulting in a person devoid of empathy for others and controlling, but also inclined to take the old local folk tales of the Island a mite too seriously.

This is an impressively accomplished debut. It has all the elements necessary for success: an engaging sense of place with plenty of local detail and French derivations, spooky old tales of the devil and suitable stone ruins to put a chill down the spine, a crafty but crazy murderer who is determined to evade capture, and a main protagonist who has several phobias to come back and impede her when danger strikes.

The book is also well paced, with the sense of menace slowly built up to a gripping finale, and the main characters have substance to them. Jenny’s experiences are given the most rein, and the pros and cons of small community where everybody knows your business are well explained, reflecting the author’s own background.

At the same time I confess to finding The Devil’s Claw formulaic, and it struck me as being somehow less than the sum of its parts.