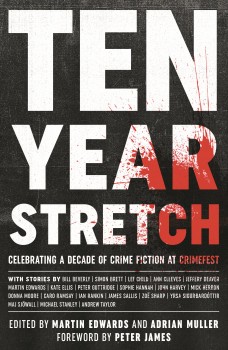 Ten Year Stretch, a collection of short stories by an impressive cast of crime writers, celebrates the tenth anniversary of CrimeFest, the Bristol convention that brings together writers and readers for three days packed full of panels and events. The convention’s relaxed, informal vibe is well represented in a collection of stories ranging from the gently humorous to the darkly twisted.

The home team are well represented too, with appearances from cosy writer Simon Brett, Ann Cleeves (well-known for her Shetland series), psychological thriller writer Sophie Hannah, Kate Ellis (who mixes history and crime into a seamless whole), Peter Gutteridge (whose good humour is well in evidence here), Mick Herron (known for his Slough House series), Caro Ramsay (who throws her medical science diploma into the mix with Tartan noir), Zoë Sharp (creator of Charlie Fox), Andrew Taylor (winner of the CWA Diamond Dagger and the Historical Dagger), and not forgetting the anthology’s editor, Martin Edwards, who also contributes a story. It’s fair to say that there are enough daggers in the mix to set off the scanners in every airport in the country.

Bill Beverly gets the collection off to a good start with The Hired Man, the tale of an impecunious ice cream server who learns the meaning of the saying no good deed goes unpunished when he saves the life of a gang boss by the timely exercise of the Heimlich manoeuvre, stopping him from choking to causing him to lose face in the process. Simon Brett poses a classic Golden Age style conundrum in The Last Locked Room, something which no crime compendium would be complete without. Lee Child offers Shorty and the Briefcase, full of his trademark style, and Ann Cleeves leaves both Jimmy Perez and Vera Stanhope behind for a trip to the Serengeti National Park for Moses and the Locked Tent Mystery, with a new twist on an old trope. Jeffery Deaver’s Blind Date comes complete with one of his characteristic twists, too, and in Strangers in a Pub, Martin Edwards serves up a liberal helping of confusion and danger for his protagonist.

Kate Ellis’ Crime Scene throws a body in the bathtub and some seemingly opportunistic blackmail into the mix, while Peter Gutteridge pokes some light-hearted, sharply-observed fun at the convention itself in Normal Rules Do Not Apply, something that anyone who has had a surreal conversation in a lift at the Marriott Hotel will certainly relate too! Sophie Hannah’s Ask Tom St Clare takes a look at the psyche of a pathological liar, and neatly turns her tale on its head in the final paragraphs. In Blue and Sentimental, John Harvey turns to a staple of crime fiction, the missing person and Mick Herron poses the provocative question, ‘How many cats have you killed?’, a variant of a conversation I’ve heard more than once at the bar at CrimeFest!

Donna Moore, one of the convention’s co-hosts, introduces an entertaining and disreputable relative in Daylight Robbery, while Caro Ramsay proves that not all kids are as cute as they might look in The Snapperoody. John Rebus makes an appearance in Ian Rankin’s Inside the Box, and in Freezer Burn, James Sallis takes a look at a future in which cryogenics provides the answer to accidents that would previously have been fatal but also throws a curve-ball into the court. Zoë Sharp makes a jump into a chillingly plausible near-future with a largely privatised police force for Caught on Camera, with a well-delivered sting in the tail for her enthusiastic rookie cop. Yrsa Sigurðardóttir’s Road Trip has all the dark hallmarks of Scandi noir at its best and Long Time, No See by Maj Sjöwall is equally chilling.

Michael Stanley’s The Ring serves up a shiver down the spine and Andrew Taylor rounds off the volume with The Five-Letter Word, a dark tale of a nasty surprise lurking in a garage.

Ten Year Stretch – like the convention itself – has something for every taste and provides an excellent mix of humour and chills from some of the most well-respected names in the business. Think of it either as a speed-dating session in the bar at the Marriott, the CrimeFest hotel, with some writers that you might be considering getting to know or as a more leisurely drink with authors that you do know and love.