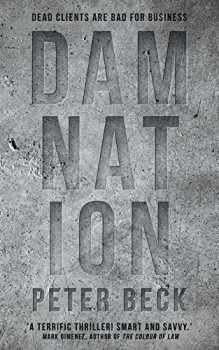 Former Swiss police special ops detective Tom Winter faces an international plot to dominate the world’s financial markets and opponents who will stop at nothing to achieve their goal.

Peter Beck’s English debut blows away the idea of Switzerland as a beautiful, sleepy and extremely expensive country and instead takes a trip into the seething world of high finance behind those discreet brass plates which denote its secretive business as the banking mecca for the world’s mega-rich individuals and corporations.

The author, an MBA from Manchester and former executive board member of a large Swiss company, now divides his time between writing thrillers and supporting businesses in shaping their corporate culture.

Beck speaks fluent English but employs the superb translation talents of Jamie Bulloch to introduce UK readers to his popular hero Tom Winter. The result is a smooth, fast-moving and mostly credible story that is almost – unlikely as it sounds – a Swiss version of James Bond.

The story is told by Winter, former commander of a Swiss police special ops group and now head of security for one of the country’s largest and most influential merchant banks. Despite his high-flying post he is surprisingly normal, preferring the restoration of his mountain home to the glitz of the world of high finance.

When a helicopter crash kills an important Arab clients and a member of the bank’s staff with whom Winter had a growing personal relationship, he sets out to discover the truth and it soon becomes clear this was no accident. The mega-rich Saudi, head of a group of disparate clans in the oil rich nation, was on his way to meet executives from an Egyptian company that is leading efforts to build Cairo’s first nuclear power station to meet a huge demand for energy.

Winter follows the trail to Egypt, only to witness the killing of the local firm’s CEO. He is then led to Bergen in Norway, where the dead Saudi had been attending a secretive conference, and then to Boston, where he meets a mysterious professor who heads an investment partnership whose clients include a number of wealthy Middle Eastern investors financing US projects.

Winter, along with his new personal interest, also the new CEO of the Egyptian company, become entangled with the US security services who suspect the Arabs of funding jihadi terrorist groups and the US company of having links to white supremacist extremists.
As you would expect from a novel centred on the financial world, there are some pertinent, sharp and informed opinions about American attitudes to Arab investment and the broader aspects of the global marketplace and foreign ownership of companies and infrastructure. These slot in seamlessly – as does as fair amount of product placement, inevitable when writing about the super-rich.

As Winter gets closer to the truth, he slowly uncovers a devastating plot designed to unsettle global financial markets. Many of the action sequences take place in the beautiful Swiss landscape of mountains, rivers and lakes leading to a finale on a spectacular scale – more Cubby Broccoli than Ian Fleming!

Despite this, Beck’s English language debut manages to be fast, smart and savvy with touches of the Bond laconic coolness. The book is extremely well-researched, especially the behind the scenes tensions of the banking world, and this enjoyable thriller, with a good story and plenty of action marks Beck out as a name to watch in the action thriller genre.