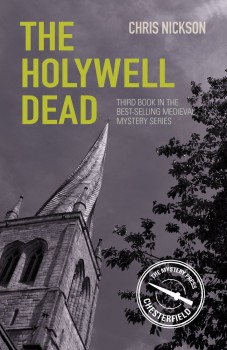 When a secretive parish priest is murdered against a background of the return of the plague, the coroner presses John the Carpenter into service yet again to discover why.

Chris Nickson, the formerly Seattle-based music journalist turned historical mystery author, stared out with the Richard Nottingham series, set in Leeds in the 1730s and featuring Nottingham, the city Constable, and his deputy, John Sedgwick. He followed this with the Tom Harper series, set in the 1890s and highlighting changing politics, anti-Semitism, the birth of socialism and union action. More series, featuring Lottie Armstrong in the 1920s and ’40s and Dan Markham, ten years later, followed.

The stories have murder at their heart but are also realistic portrayals of the people and life of a city where all except the rich lived in grinding poverty. They’re about families, the way relationships grow and change, the politics, the brutal inequalities of the law. All share three things: an appealingly human protagonist with a keen social conscience and deep roots in a city which itself was a character; a concentration on the family as the fulcrum and a real touch of warmth and sly humour.

Having temporarily exhausted his home town, Nickson turned his attention to Chesterfield. The Crooked Spire and The Saltergate Psalter introduced us to reluctant detective John the Carpenter, pressed into service by the demanding and ambitious coroner de Harville, a man determined to uphold the king’s law whatever the cost.

In 1364, plague has returned to haunt the town, but when the parish priest vanishes, John discovers his body in an empty house. As more killings follow it becomes clear that Chesterfield has somehow become the centre of a bloody border feud and a professional killer who will stop at nothing. The details of the feud are almost unimportant, except inasmuch as they combine to threaten John’s family.

The focus is again family and town: the constant threat of the plague and its effects on the life and people on Chesterfield and their often strained relationships, and the violence prevalent to the age, which is never far from the surface.

John is a talented, but not brilliant woodworker. He feels for his work and does his jobs well – a genuinely nice man, devoted to his wife and family. His relationship with his apprentice, the dumb Alan, a boy who ‘feels’ the wood and may have a real natural talent as a carver, is a highlight of the story, as is John’s compassion for those less fortunate which will, in the end, save his life.

This is no rip-roaring adventure, more the confused progression of a decent man trying to do his best in circumstances in which he has little control, but it’s a brilliant read and for my money Nickson’s best to date.