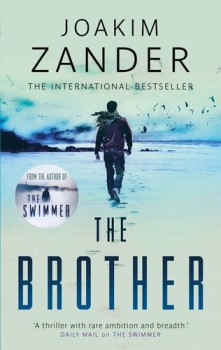 Yasmine broke her promise to protect her little brother, but when she realises he is still alive, she is determined to make amends.

If you’ve ever wondered how a refugee child, rescued from the horrors of war in the Middle East, can grow up to carry a bomb into a pop concert or leave his or her home and family to risk everything to join ISIS in Syria, you should read this. It’s not the greatest story ever written, but it is gripping and urgent and relevant to today’s world, combining global issues with personal and generational problems.

Yasmine vowed to protect her little brother Fadi from harm. She broke her promise when she left home, abandoning him to a pointless life in the Stockholm slums. Five years later she hears he is dead, killed by a US drone in Syria. Then her mother sends her a picture suggesting Fadi may still be alive, and she quits her unsatisfactory life in New York to return to Sweden determined to find him.

This, at times, disjointed tale is narrated by the siblings and by Klara, the uncertain and hard-drinking legal researcher, the major character in Zander’s debut The Swimmer.

Slow it may be, but Zander has once again come up with a contemporary plot. Despite his background in the law, the European Commission and EU Parliament, he does not preach at the reader. This is not your typical Scandi noir. Its international outlook takes the reader to dark places without dwelling on the darkness.

Much of the action is set in Bergort, a run-down concrete jungle on the outskirts of Stockholm. Muslim refugees have homes there, but no lives – separate from the rest of Swedish society and ostracised. The older generation work all hours for poverty wages. The younger men and teenagers have no sense of identity. They speak the language of their hosts, play their videogames, but are never accepted as part of society, lose sense of their roots and soon drift into increasingly violent juvenile crime.

It is one such crime committed by Fadi which leads his protective elder sister to leave. Almost lost without her, he searches for some purpose and tries to connect with his people’s spiritual history.

Inevitably a toxic mix of religion with ignorance, fuelled by online videos of other Swedes who have taken up arms in the name of Allah, brings him to the attention of ISIS recruiters and offers him the inspiration of the call to martyrdom. But Syria and ISIS are hardly what he imagined – and he ends up disillusioned and seeking vengeance.

Yasmine returns to Bergort, now an unsettled place of nightly riots and burning, triggering a set of events over which she has no control and which brings danger as she is drawn into international espionage and corporate corruption.

Meanwhile Klara, researching in London for an ambitious EU project to privatise some functions of its members’ overstretched police services, is drawn into a different part of the same web through the murder of a colleague. Eventually the protagonists’ stories intertwine in an explosive finale.

The plotting is clever – and surprisingly believable. The characters are strong and well written, and Zander’s research – he spent time in Syria and draws on his political experiences to flesh out the international chicanery and inter-governmental dealings – makes this ambitious thriller which delivers on many levels well worth the read.