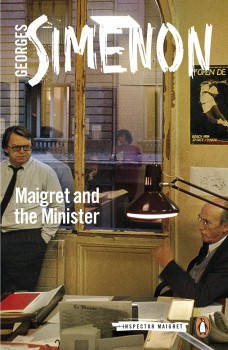 Maigret and the Minister

A telephone call from the Minister for Public Works heralds a case of unusual complexity for Maigret.

Maigret is no stranger to politics but previously any approach haa always been made through his chief. When the Minister for Public Works, Auguste Point, rings him personally and asks him to his private apartment rather than the ministry itself this indicates that the case is to do with politics – something that Maigret has always tried to avoid.

The Minister explains that he has a problem – possibly a career-ending one – and that Maigret is the first person he has spoken to about it. He explains that he has chosen what is a highly irregular approach because he has been impressed by what he has heard and read about Maigret and wants to avoid the official route through the Police Judiciaire.

Point goes on to say that he wants Maigret’s help following developments in the Clairfond affair. This is the collapse of a sanatorium built in the Haute-Savoie for disadvantaged children, 128 of whom died as a result. A report by a Professor Julien Calame, an expert on applied mechanics and civil engineering, has never been published and nobody knows where it is.

A corrupt journalist is now suggesting in the newspaper La Rumeur that there are important people with something to hide. However, says the Minister, the report did exist and a man by the name of Piquemal, a supervisor at the École Nationale des Ponts et Chaussées, where Professor Calame had worked before his death, had given him a copy. It concluded that the project was technically unsound and should be abandoned. Unfortunately, the report had been stolen from his apartment on the evening of the same day he had received it. Point goes on to assure Maigret that, although things look bad for him, he is completely innocent. Maigret believes him.

As he begins his investigation, which requires all of his team, he is soon aware that the Sûreté National is involved, probably because of recent hints in the La Rumeur that the Calame Report is being suppressed. There is also more than a suggestion that Arthur Nicoud of the building firm Nicoud et Sauvegrain, which built the sanatorium, is trying to ensure that the report stays hidden.

Maigret realises that the Calame Report is vital and that he must discover, if not the report itself, at least the identity of the person who stole it from Point’s apartment. This involves a number of interviews with various concierges, some more observant and cooperative than others. At the same time there are individual people to be kept under observation – Blanche Lamotte, Point’s secretary, and his principal private secretary, Jacques Fleury. Additionally, a watch has to be kept for Piquemal, who has disappeared.

Maigret knows that the investigation is becoming a race against time as the questions raised by newspapers point more and more to Point’s involvement. Le Globe, a newspaper more or less run by a powerful and influential Deputy, Mascoulin, has an article reminiscent of Zola’s ‘J’accuse’ which talks about the report having been handed to the appropriate authority.

Having employed Lucas, Janvier and Lapointe full time on the investigation, Maigret collects a lot of information, after which it is time to take action based on what has been deduced. The outcome, when it arrives, is both sudden and surprising.