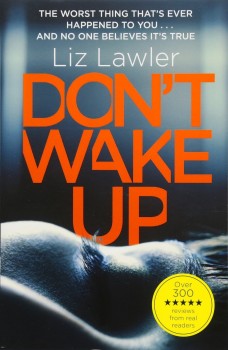 A&E doctor Alex Taylor knows she’s been subjected to a horrific attack. The problem is that no one else believes her.

Alex Taylor is a well-respected doctor in an accident and emergency unit in Bath. She has a successful career with her sights set on a consultancy. She has a loving boyfriend, good friends and supportive colleagues. But that all changes the day Alex wakes up to find herself strapped down on an operating table with her legs held up in stirrups. She has no memory of how she got there or why she’s there. She has already been subjected to intimate medical procedures by a man dressed as a doctor who forces her to make a hideous choice: to consent to her own rape or to suffer the consequence of saying no.

When Alex wakes up, she’s in a different bed, this time in her own accident unit, surrounded by people she knows. She was found unconscious in the hospital grounds. Everyone else believes that she was hit on the head by a falling tree branch, but Alex knows she was raped. Her problems start when she tries to convince anyone else of this. There is no physical evidence to back up her story and everyone, including Patrick, her boyfriend, believes she is suffering some sort of breakdown.

Don’t Wake Up gets off to a deeply unsettling start, and forced me to confront the question of why – in a genre knee deep in murder – it felt worse to be thrown straight into a graphic scenario being set up for rape. Murder is acceptable Sunday afternoon or evening viewing, but imagine the outcry if TV served up Rape She Wrote or Midsummer Rapes. I almost didn’t manage to force myself past the opening chapter, but when I did, I was thrust headlong into the rapid disintegration of Alex Taylor’s life and quickly became immersed in her story.

When a woman is brought into Alex’s department, haemorrhaging from a self-induced abortion, Alex hears her dying words and realises her abductor has struck again, but neither her colleagues nor the police believe her. Harassed DI Greg Turner is sympathetic but unable to find anything to back-up Alex’s claims, while DC Laura Best is actively hostile, believing that Alex has a serious psychological disorder.

Liz Lawler takes a shocking premise and runs with it to good effect. Alex’s relationships with her boyfriend and her colleagues are irreparably broken by their inability to believe that she is telling the truth, but without any physical evidence, it all comes down to a matter of trust, something that is at the heart of the book. Don’t Wake Up is an engrossing read that successfully challenges perceptions and prejudices and does a good job of concealing its secrets.