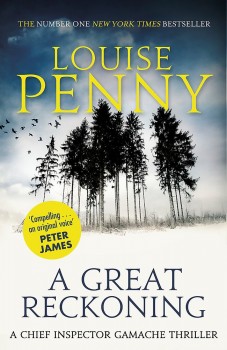 A professor in the academy for the training of police recruits is found murdered. The killer could be another disgruntled professor or even one of the recruits.

Former Chief Inspector Gamache has taken up a post as director of the academy that trains new recruits for the Surete du Quebec. For many previous years he was Head of Homicide for the Surete and now he has the chance to influence the quality of new recruits.

Much has been going wrong at the academy regarding both financial management and the quality of training. So, as the new director, he is now able to make sweeping changes but he also needs to find out who he can trust and who are the bad apples. His careful recruitment of both trainees and professors brings with it some nail-biting scenarios.  He is certainly a risk-taker by nature. One day one of his gambles takes a bad, unexpected turn, as one of the professors is found murdered.

In contrast with the turmoil at work, Gamache and his wife Reine-Marie live in a very small village which doesn’t even appear on local maps. This small Canadian community is portrayed in great detail in the book. The characters of several of the inhabitants are built up throughout the story. For example, there is Ruth, an irascible old woman who says exactly what she thinks and has a pet duck. Also, among others, there is Clare, a peculiar artist who is in the process of creating a rather striking self-portrait, and of course Reine-Marie herself who has a job involving the study of old documents. They all have great depth and their lives revolve around the Gamache household or the local bistro. All this suggests that the author has first-hand experience of such a community, the book being a real window on how such a place might function.

These two environments, Gamache’s place of work and his home, become entangled when an old map of the village is found in a box of papers which had previously been discovered deep within the wall of the bistro during its renovation. When Gamache sets some of his new students to investigate the background of the map as a training exercise it becomes clear that the murdered professor may not have been the only person at risk.

The killer must still be on the loose with who knows who as the next target. It might be Amelia, the newest recruit who dresses like a Goth and has a colourful and fairly sordid past history, or Jaques who has been well and truly brainwashed by the previous regime at the academy. And there’s a question hanging over whether Gamache has any previous links with these characters. There’s also the distinct feeling that he might know more than he’s letting on.

These questions and the different plot lines regarding the academy, the village, the professors and the recruits, and even the investigators who are brought in after the murder, all contribute to a very well-paced story.  It is appears to be based on conscientious research and keeps the reader guessing until the very end.