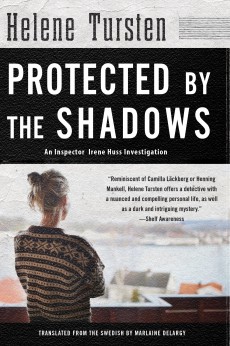 Protected by the Shadows

The burnt-out body is just the beginning in this latest wave of organised crime and Goteburg detective Irene Huss discovers her own family is caught up in the gang chaos.

Goteburg detective Irene Huss has little time to celebrate her husband’s acquisition of his restaurant. The following morning, she must start investigating the brutal murder by arson of a member of the two notorious biker gangs. She and her colleagues know the cork has popped on the simmering tensions between the biker gangs, and reprisals will follow.

Irene doesn’t realise her own family is caught up in the gang chaos, until a bomb explodes under her husband’s car. Neither does she realise at first that there is a mole in her team, a person who will put Irene’s team at risk. There is only one solution to protect her family; Irene sends her husband and daughter into hiding. But that doesn’t stop Irene feeling that someone is following her.

This is the last in the Inspector Huss series. Although I am a fan of Scandi crime, Tursten is not an author I have read before. So, I was looking forward to making a new ‘friend’, even though I was extremely late to the party. The point of view is primarily that of Irene Huss, written in the third person past tense. Normally this distancing effect does not reduce my pleasure of police procedural novels, if there is sufficient sensory-driven writing to draw me in, and if the plot is fascinating.

The first chapter showed promise; a young pizza delivery lad, lost in the back streets of Goteburg, witnesses an horrific murder when a man in flames drops dead in front of him. But the further I read, the more I felt the first chapter was out of character with the rest of the story. The swathes of tell with little show to liven the plot detached me from the action. The frequent reference to earlier crimes felt like unnecessary backstory. This writing style meant the stakes never felt high, even though there were several murders.

I found it difficult to invest with the characters. The author has used the clichéd description style of brown-hair-blue-eyes-black-jeans. I am certain I am not alone in thinking that I don’t care what your characters look like – bring them to life with original observations. And quite simply, there are so many secondary and also-ran characters here that not one player has enough page space for the author to develop him or her. The bikers are stereotyped and numerous, which makes it difficult to distinguish them. This is particularly disappointing and frustrating when it means the reader struggles to even remember in which of the two gangs a character is.

The dialogue is generic and flabby in places. Although written conversation should not consist of only short sentences and monosyllabic responses, it should be sharp and tight. Some of the dialogue in Protected by the Shadows is so long and uninterrupted by gestures or action, it could be called monologue.  It deviates all too regularly from the standard and discreet ‘said/asked’ speech tags, which interrupts the flow. Despite my criticisms of the style of dialogue, there is not enough of it to push the story forward.

The plot is predictable, and the clues are so heavy-handed that the mole might as well put on a clown suit, stand under a neon light and shout out, “Here I am.” There is little mystery in gang warfare police procedurals. So, there must be a bit of fairy dust, either in subplots, investment in the protagonist, or stakes as high as the Eiffel Tower, to entice the reader into reading nearly 300 pages. Unfortunately, Protected by The Shadows doesn’t deliver.