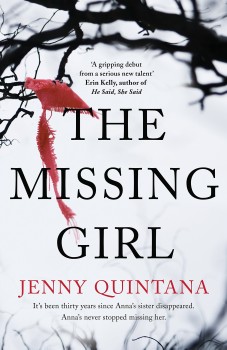 The 30 years since Gabriella disappeared have not erased the memories, or numbed the pain. Now her sister Anna is determined to find out what happened.

1982. Anna and Gabriella are close, even though Anna is the 12-year old tagalong little sister. Village life, school, even friends and family cannot come between the girls. Until for no understandable reason Gabriella changes. She grows increasingly secretive, distant, and hurtful to Anna, preferring the company of Martha, the weird child no one else likes. Then Gabriella goes missing, and despite months of investigation, the police never find her.

Fast-forward to the present, and Anna’s mother has died. Anna returns from her life in Athens to say her last goodbyes. She will not stay long, simply close the family shop, clear the family home, and leave. But Gabriella’s ghost is everywhere, begging her to find out what really happened. Thirty years may have passed, but the pain of Anna’s loss has never diminished. She becomes increasingly determined to discover the truth about her sister’s disappearance, whatever the truth may be.

This book is outstanding. From the first line, Jenny Quintana plunges her readers into Anna’s world with exquisite senses-driven writing. Her word choice is unpretentious, yet almost poetic. Her attention to detail is exceptional, yet brief. In two descriptive words, she conveys an intricate image of a person, a scene, the atmosphere, where most writers would take paragraphs.

The story flips between 1982 and today. At no time did I lose sense of the date. Even though Anna never reaches for her mobile in the chapters relating to the here and now, even though her surroundings are those of her childhood, I was in no doubt that I was following an older Anna, in a village that has changed without really changing.

Even better is the way the author reminds her readers of life in the 1980s. Whether it be the Walkman so precious to Gabriella, the reference to music of the era, or the way in which adults whispered in corners, protecting their children’s innocence, the reader travels back 30 years. Equally so, the reader never discovers the name of the village, yet in no time comes to know the milieu intimately, and the place becomes as much a character as the others.

If I had to criticise, I would say that occasionally I found the word choice a little adult for Anna as a 12-year old, particularly remembering the era of her childhood. But it was not enough to grate or break the suspension of disbelief.

Anna leaps off the page. She is honest, at times ugly in her behaviour, and utterly human. Her introspections are convincing. Her actions and reactions draw on the reader’s emotions without being force-fed melodrama.

All the characters vibrate with life. The reader cannot fail to recognise each of them as real people. From the spiteful neighbour to the kindly school teacher, they could be stereotyped, but they are quite simply not. Moreover, it is refreshing to be able to identify them from small observations rather than the mediocre brown-hair-blue-eyes descriptions to which readers are all too often subjected.

The book is written in the first person, and there is intimacy. And even though it is written in the past tense, the atmosphere and urgency provide immediacy to the story. The plot is relatively simple, but Quintana keeps her readers guessing until the final pages. The ending is as it should be. On that point, I will say no more.

This debut novel has the polish and depth of a seasoned author. It has the mystery and emotional tug to compete with the best. The Missing Girl is a captivating, fast read, and one that I could not put down.