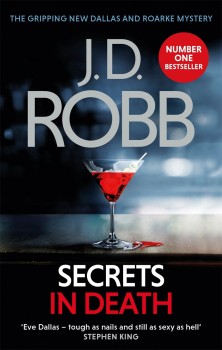 Lieutenant Eve Dallas witnesses the murder of the glamorous, but poisonous, journalist Larinda Mars. In order to find the killer, Dallas leads the investigation into the web of unpleasant interactions that is Larinda’s life.

Lieutenant Eve Dallas, with her prickly personality and her almost reactionary rejection of the trendy and contemporary, should not be a likeable personality and yet she is. JD Robb infuses her strength of character and determined, bullish ways with enough of a touch of insecurity to make her appear almost vulnerable at times. Her unfeasibly rich and successful husband Roarke is impossibly handsome, an ex-criminal with a damaged childhood plus overwhelming charisma and charm which all provide an interesting foil to Eve’s manners and the nature of her job. He is her genie.

This time the plot involves the murder in a smart city bar of the unpleasant but highly successful gossip columnist Larinda Mars. She is murdered by a cut to the brachial artery and she bleeds out in front of all the customers, one of whom is Eve Dallas who happens to be there meeting someone she does not particularly like.

Eve and her sidekick Peabody investigate Larinda’s professional and then her personal life, uncovering a complicated, but well-documented, network of extortion, blackmail and threats. The possible perpetrators of the murder are many. Motivation is clear but who would have the passion and recklessness to actually go through with killing this woman, so hated by many.

As usual the book is very well-crafted and gripping. Not a lot happens, there are long conversations and descriptions of place and person, but the plot is engaging, the exposées are well placed and the development of suspects is handled with skill. I went through the book enjoying the progress of the investigation and experiencing the comfort of sharing interactions with a cast of characters with whom I’m very familiar. It’s hard to know how this book would read without prior knowledge of the series, but I joined the series well into its run and quickly became absorbed. It really is very well-written.