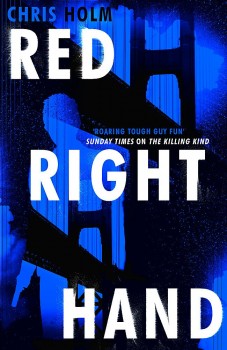 You can approach this amazing, violent and typically American story on two levels. As a simplistic read to pass a long flight it will keep you rivetted as it lurches at breakneck pace through bombings, shoot-outs, hand-to-hand combat and high-tech skulduggery which makes Mission Impossible look positively mundane. For the weak-kneed there’s an occasional touch of remorse, even redemption, but mostly it’s a vindication and justification of the American obsession with meeting force with force and violent revenge.

Or you can read between the lines and take it as a serious warning of the ever-growing involvement of the private sector in law enforcement as Holm poses the question of what could happen if a corrupt company ever joined forces with organised crime.

A family’s holiday video goes viral when it captures an Islamic terrorist attack on San Francisco’s Golden Gate Bridge – and in the background reveals a key witness in the FBI’s battle against the Council, an association of organised crime families, who investigators had long thought dead. With the West Coast and much of America gripped by a kind of post-9/11 hysteria, Special Agent Charlie Thompson can find no official backing for her quest to hunt down the ghost known as the Red Right Hand, once the Council’s dreaded enforcer.

Following the very American principle that if the good guys can’t or won’t help, call in a bad guy, she contacts ex-Special Forces killer and CIA assassin Michael Hendricks. Hendricks, who made his appearance in Holm’s The Killing Kind, is the modern equivalent of the bounty hunter so beloved of Western stories. He’s sick of his former life, and has built a successful business solving the problems of those threatened with being ‘hit’ by permanently removing the hitmen – saving life while ridding society of undesirables – all for a price, of course!

Hendricks, who was robbed of his technically minded partner and closest friend by a Council hit that he failed to anticipate, now seeks revenge by destroying the heads of the criminal organization. He’s saved from death by the 20-year-old daughter of one of his former clients, who just happens to be an internet whizz-kid, and he reluctantly allows her to become even more involved in his personal quest – and eventually in his hunt for the FBI ghost.

Holm balances issues of national security with more intimate personal loss in a story set entirely in that gray area between good and evil – a sort of ‘good’ guy versus bad guy versus even worse guy tale in a chaotic scenario lightened occasionally by some real empathy and humour.

Hendricks is a bad man, acting for selfish motives while trying to convince himself he has a purpose, conscience and some vestiges of a moral code. He does not kill lightly – only the really bad guys, merely beating the unwitting dupes of criminal conspiracy to a pulp!

The shifty world of military and para-legal enforcement contractors, which forms much of the background, points to a possibly greater menace than organised crime. Amid this saga of violence, violence and even more explosive and bloody violence, Holm has a serious point to make in what is a quite brilliant book.