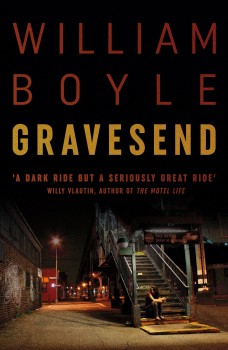 Ray Boy Calabrese is released from prison 16 years after a gay-bashing incident led to the death of a young man. Consumed by guilt and despair, he seeks street justice – a revenge killing from one of the dead boy’s relatives.

Forget the American dream. This sad, sick, tale of a bunch of losers from the wrong side of the trendy Brooklyn tracks is the ultimate American nightmare.

William Boyle’s debut, first published in a French translation, where its open condemnation of the American system saw it nominated for prestigious awards, features a selection of damaged souls and evil wasters – all going nowhere.

None of them are, by any stretch of the imagination, normal. Boyle drags the reader through the seedy underbelly of New York and their eventual endings are as horrible as can be predicted and inevitable in view of what has gone before.

All the principal actors are seriously psychologically damaged. Ray Boy Calabrese is released from prison 16 years after his part in a gay-bashing incident led to the death of a young man guilty of nothing but his sexual preferences. Once the tearaway idol of his neighbourhood, guilt and despair now consume Calabrese. He’s still hard on the outside, but has collapsed mentally and now seeks only the street justice of the shrinking Italian community –  a revenge killing from one of the dead boy’s relatives.

The victim’s brother, Conway D’Innocenzio, a 29-year-old failure in a dead end job and nursing a festering grudge, lives much of his life in a fictional, self-induced haze of despair. Obsessed with killing his nemesis, sheer cowardice makes him incapable of following through.

Calabrese may be no longer the neighbourhood threat his friends – and his unpredictable loose-cannon nephew Eugene – would like him to be, but his failings are the key which binds the whole sordid plot together.

Against a background of dirty streets, foul tenements, former convicts, amoral ex-cops, Russian and Italian mobsters and would-be teenage gangsters, Boyle creates an atmosphere of almost claustrophobic intensity as he twists their lives together.

This beyond-noir recitation of the pressures of memory, legacy, reputation and their toxic baggage which returns to haunt subsequent generations – with its Soprano-like dialogue, tension, frustration, dirty sex and the constant threat of violence enlivened by occasional flashes of comedy, unexpected changes of direction and deep background detail – may be far too strong for most British readers. Gritty, a word much-used in reviews, hardly scratches the surface of this modern horror story.