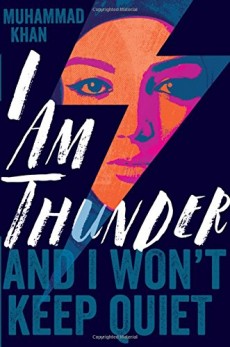 Fifteen-year-old Muzna wants to be a writer. Her Pakistani-born parents want her to be a doctor. When the hottest boy in her new school starts to pay attention to her, Muzna can’t believe her luck, but all good things come at a price.

Muzna Saleen wants to be a writer but her Pakistani-born parents want her to become a doctor. Her family came to the UK for a better life. Her father is a social worker, while her mother remains at home, still unable to speak or write English. The weight of their ambitions for her is crushing Muzna and it’s not something she can easily talk about to anyone else, not even her best friend Salma. When Salma is caught in bed with a boy, Muzna’s family insists she has nothing more to do with her friend, leaving her even more isolated.

The family’s fortunes take an abrupt downturn when Muzna’s father loses his job and they must move to a different area and Muzna has to change schools. But to her surprise, she does make a new friend, and things start looking up when Arif Malik, the hottest boy in the school, takes an interest in her. Muzna can’t believe her luck. She can’t tell her family, though, as getting to know Arif has also started to bring Muzna into more contact with Muslim beliefs, something her family have always shunned, believing it will make them the target for those who equate Islam with terrorism.

Muzna Saleen is a narrator who instantly springs to life on the page. She’s struggling to come to grips with being viewed as an outsider in British society, and suffering the usual crop of teen problems, such as bad skin and an excess of facial hair that knocks her confidence and makes her think that no boy will ever be interested in her. And controlling parents who would freak out if she was caught taking an interest in a boy don’t help. All this means Muzna is ripe for grooming into the more radical side of Islam.

The gradual, insidious way radicalisation can take someone completely unawares is amply demonstrated in Muhammad Khan’s searingly honest look at what it is to be a teenager struggling to find their own identity in a morass of competing pressures. The difference between Muslim beliefs and radical Islam is handled strongly but with sensitivity. The book is a timely reminder in an increasingly insular and intolerant Britain of how easy it is to creates divides in a community and push people into the hands of the many radicals keen to exploit feelings isolation and the need to belong.

I Am Thunder is a stunning debut written with confidence and a compelling voice. Khan uses his experiences as a secondary school teacher to good effect to produce a crop of believable teens and a strong story that never slackens its grip.