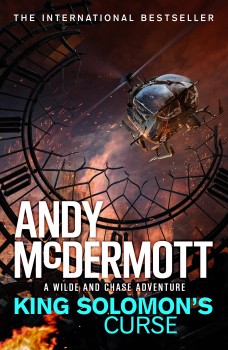 Archaeologist Nina Wilde goes in search of the legendary King Solomon’s mines, and ends up putting her young daughter at risk.

Nina Wilde and her husband Eddie Chase are back. For those who haven’t already made their acquaintance, Nina is probably the world’s most famous archaeologist – Mark Horton, step back! – and Eddie is a former SAS hard man. Together, they’ve found Atlantis, the tomb of King Arthur, Valhalla and even discovered the Ark of the Covenant, to name but a few of their adventures. Lara Croft and Indiana Jones would almost certainly be green with envy and Nina’s style of archaeology is definitely more Bonekickers than Time Team. You get my drift?

Nina is working on a televised documentary on the search for the first temple of Solomon in Jerusalem. A secret chamber within the tomb contains a model of a mysterious city that is said to house an ancient artefact of terrible power. Naturally, that’s right up her street. The only problem is that the hidden city is in the Democratic Republic of Congo, one of the most dangerous countries in the world, locked in the middle of a ruinous civil war.

Actually, that’s not the only problem. There’s the even more pressing concern than Nina’s young daughter Macy expects her mother home in a couple of days and Eddie doesn’t want to see her disappointed. But for Nina, the lure of yet another discovery isn’t something she can easily walk away from and as she has a handy film crew at her disposal, she jets off to the DRC, much against her husband’s better judgment.

Eddie flies out to meet her, leaving Macy in the care of his parents, with the intention of arranging some bodyguards for Nina and the film crew, but things don’t go quite according to plan and he ends up joining the expedition. Cue another high-speed romp through the jungles of Africa and into the depths of the legendary King Solomon’s mines.

Andy McDermott’s trademark thrillers have lost none of their verve even this far into the series. The action scenes are a vivid as ever, but for once, no helicopters get blown out of the sky, saving my liver from the ruinous drinking game where you take a shot for every chopper that crashes to fiery oblivion, but there is a hijacked airliner to make up for that lack. As usual, there’s a high body count, with an interesting moral dimension to one death. On top of all this, the supporting cast are sufficiently well-drawn to make each loss matter, something that a lot of thrillers fail to achieve.

On this occasion, Eddie gets to operate on home soil again, when the action moves to England for the last part of the book and McDermott gets to destroy something very quintessentially British amidst all the chaos, as well as staging an excellent chase scene involving a London bus! The closing scenes are tense and well-played and at the end, I was left wondering how Nina and Eddie can justify continuing their hair-raising adventures. I hope they find a way, though, as I’m sure there are plenty of legendary sites left in which they can create havoc.