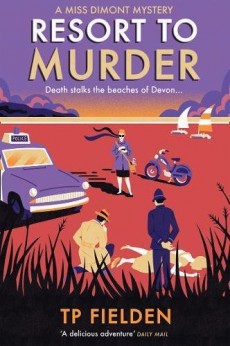 Miss Judy Dimont, chief reporter of the Riviera Express newspaper, has a new puzzle to solve and a cub reporter to initiate into the ways of journalism. Lucky then that a juicy story – a mystery death on the beach at Temple Regis – has appeared.

This tale is based around historic legacies. The results of an old quack product. The family history of a new cub reporter. The old school reputation of the manager of a new band. The fallout from a secret wartime operation that went disastrously wrong. And, of course, the history of our heroine herself.

We are back in Temple Regis and while TP Fielden bathes its various (and eccentric) occupants in a warm glow of nostalgia they don't neglect the shadows that warm light casts. While the theatre manager's grandson is attempting to drag the town kicking and (literally) screaming into the modern era with Britain's most famous beat combo, the contestants of the local resort’s beauty pageants are being exploited by the slippery manager, Cyril Normandy. There is the fearsome feminist group, Sisters of Reason, protesting the demeaning shows, but how far will they go? And how far have they already gone?

A young woman has been found dead on the beach at Temple Regis. She was too far from the cliffs to have jumped, so it’s not clear how she got there. DI Topham has concerns, but cannot act on them. Miss Judy Dimont, chief reporter of the Riviera Express newspaper, has no such scruples and uses it as a training exercise for the new cub reporter Valentine Waterford. Valentine gets initiated into the ways of local paper reporting (manhole covers are just as important as dead bodies) as well as an introduction to the local personalities.

There is also the brewing scandal of a local businessman's quack medical device. It’s not clear why Rudyard Rhys, Judy’s less than competent editor, is so determined to defend the manufacturer's reputation in the Riviera Express, or what the connection is between them.

TP Fielden sets up a nice little puzzle for Judy to work her way through. There are plausible red herrings dotted throughout. This is all in a nostalgic setting filled with local personalities, with the women generally more competent than the men. Temple Regis is not losing its charm and neither are the insights into local newspaper reporting. If you enjoyed the first one, you will enjoy this. If you haven't read the first one, you could still start with this book.