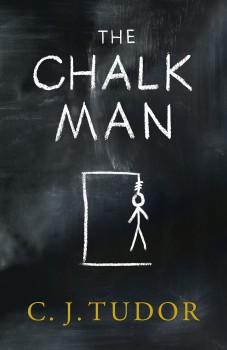 1986. Eddie Adams and the rest of the gang are off to the fair. It’s the first time they are going without grown-ups to rain on their parade. Fat Gav, Hoppo and Metal Mickey are already waiting. Nicky is late as usual. That’s girls for you. It will be the last time Eddie goes to the fair for a long time. That’s not surprising, when half the Waltzer girl’s face is ripped off in front of him. The girl survives, but from that day on, everything turns bad.

2016. Eddie is still living in the house where he grew up. But now he is the man of the house. And Chloe is his feisty, sarcastic lodger. Eddie is intrigued when he receives an unexpected letter from Mickey. He reluctantly invites him for dinner, and even more reluctantly listens to Mickey’s proposition to help him write a book about what happened back in 1986. Then Mickey hangs a carrot in front of Eddie’s nose – he says he knows who killed the girl. Bad is about to get worse.

The Chalk Man, flipping between the two periods, is written in the first person past tense for 1986, and in the first person present tense for 2016, all from Eddie’s point of view. Eddie’s voice, written through the eyes of a 12-year old boy, is wonderfully convincing at the start. His language, introspections, even his observations tingle with that pre-teen vulgar curiosity, along with that well-known beginning of disbelief in the strength and perfection of adults. However, I felt the vocal differences between the young Eddie and his older self blurred towards the end of the story. Not enough to spoil the flow, but a little disappointing.

Eddie is a believable character, with childish flaws, and even bigger ones as an adult. He is self-deprecating, but too weak-willed to do anything about his flaws, rendering him human and vibrant. The other characters are intriguing, and although recognisable as children and adults we all know, they are far from stereotyped.

The writing style, along with events, grips the reader from the start. Atmosphere slides from disturbing to dark, even though the horrific murder is not put on a pedestal as the main event. In fact, there are so many little nasties that unfold in this book that the reader could be forgiven for forgetting that the murder is central to the plot. Instead, the story overwhelms the reader with the sense of a lost childhood, and how adults cannot shed their past.

There is enough incidental observation to make the two eras convincing, and although Anderbury is a fictional town, the reader will recognise it, and feel as if it is real. Seen through Eddie’s childish eyes, it has that heady combination of comforting and menacing. Anderbury has character.

Foreshadowing and sprinkled clues are cleverly and discreetly handled, leading to a disturbing and sad conclusion with some sharp twists. To realise after closing this book that The Chalk Man is a debut novel is inspiring. CJ Tudor clearly observes well, and like any good artist, she knows how to reproduce her observations convincingly.

The Chalk Man is fascinating, with a random, chilling plot. It is not often I agree with critiques using the words page-turner or thriller. But this is one where I do.