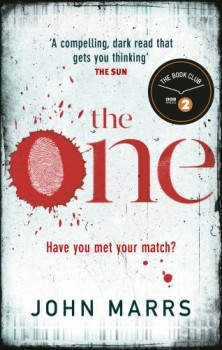 A simple DNA test. But will it find their perfect partners or send them on a journey into danger?

Mandy’s a divorcee whose husband abandoned her after they failed to have a child. Now she's been Matched to a smoking-hot surfer.

Christopher’s a meticulous psychopath who's not interested in finding love, but is curious about what kind of person could love someone like him.

Jade has recently paired with a sweet Aussie. Unfortunately, she lives in the UK and is stuck in a menial job. Will they ever meet?

Nick is about to marry the woman of his dreams. He doesn't believe in the Match, but agrees to sign up because his fiancée wants confirmation that they are soulmates.

Ellie is CEO of a global company with no time to nurture her personal life. She signed to be Matched a decade ago, but it's only now her Match has turned up.

Five people’s tales. But will there be five perfect soulmates and five happy endings?

Although I am not a science fiction reader, the concept of being genetically destined to be with someone fascinated me. However, I am not completely ignorant, and found the ‘technology’ clunking and the science behind the match highly questionable. I let this ride because there was an attempt to explain it, along with the test’s shortcomings. Plus, the author raised some interesting questions about finding The One: a person’s soulmate of the same sex, but not gay; a large age gap; an unexpected soulmate; one who had already died.

The One is written in the third person past tense, and there’s a degree of detachment from the main characters right from the start, particularly with a plethora of points of view. The writing style is simplistic, bordering on naïve, and although there’s a chilling, disconnected air to Christopher’s voice, which complements his psychopathic bent, the rest of the voices are generic and predictable.

In fact, within the first few chapters, I felt the author was dumbing down his writing for a dim-witted audience. However, the worst aspect of his writing was the dialogue. At best, it was unrealistic, at worst, cringeworthy. It’s not even worthy of a B movie, and it’s in severe need of editing.

Between the corny dialogue, hackneyed introspections and often implausible behaviour, the characters are one-dimensional and difficult to connect with. Mandy’s reactions and decisions are foolish and her story-end far-fetched, rushed yet overdone. Christopher’s evolution is laughable. Jade is supposedly a strong, independent woman who just comes across as a self-serving brat. Nick is likeable, but his story-end is incredible. Ellie is relatively interesting, but too stereotyped.

I was confused. The connection between the characters was weaker than a second-hand tea-bag, which left the book reading like a muddled collection of five short stories with at least as many ways of approaching the tale. It would have been far better to have concentrated on one or two of the characters, connected them, developed them and turned it into either a romance or a thriller, or even an ethical concept.

I am still undecided where this book was going. It lacked direction, and reminded me of a child let loose in a sweet-shop; chucking indiscriminately everything he could grasp into the bag. For readers wanting to explore an interesting concept, there will be many who enjoy this book. It is reasonably paced, an easy read, and with short chapters and a few twists, there is a degree of cliff-hanger. For me it was Five Shades of Grey.