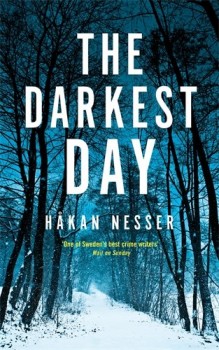 The Hermansson family are gathering to celebrate father Karl-Erik and eldest daughter Ebba’s joint landmark birthdays. But underneath the smiles, tensions are running high. Before the festivities are over two members of the family are missing. Inspector Gunnar Barbarotti must find out what has happened.

Håkan Nesser, one of Sweden’s best crime writers and author of the bestselling series featuring the melancholic Inspector-turned-bookseller Van Veeteren, does not need any introductions. His stylish prose, full of suspense, acerbic observations, occasional sharp humour and beautifully constructed flowing sentences feels familiar as soon as you start reading another novel. However, Inspector Gunnar Barbarotti so far hasn’t been presented to the English-speaking world, although he entered the Swedish realm more than 12 years ago. Luckily, The Darkest Day, the first instalment in a brilliant five-part serie,s is here to remedy this.

As December days get shorter nearing Christmas, the Hermansson family are gathering in the quiet Swedish town of Kymlinge to celebrate father Karl-Erik (65) and the oldest daughter Ebba’s (40) joint birthday. Mother Rosemarie, calling herself ‘a timid goose’, has just retired as a needlework teacher and occasional German teacher and feels trapped. Her mind tells that either she or her husband must die. But of course the irrational thoughts will not cause her to even contemplate taking any such drastic action.

Dictatorial Karl-Erik has also retired from teaching but his head is full of plans for the future, namely selling up and moving to Andalusia to avoid the boring prospect of Swedish retirement, and to discover the rich Jewish- Moorish-Christian history of the region. Under no circumstances will he admit that this plan is to escape the full-blown scandal of their loose cannon son Robert being an absolute idiot on a reality TV show, watched by two million people a month or so earlier.

Alpha-female Ebba, her husband Leif and two sons – 14-year-old Kristoffer and student Henrik – are also on the way to the family home. Unfavourite daughter Kristina, stern husband Jakob and strangely quiet two-year-old Kelvin would have preferred to scrap the big birthday altogether.  Though questioning her life choices, Kristina is the only one not sweeping under the carpet the disgrace brought by her brother.

As the subdued celebrations continue, the tension grows. Deeply unhappy people pretend that ignoring facts and feelings will make them float successfully on the surface of this festive gathering.  But before the special dinner becomes a memory and gifts are packed away, two people are nowhere to be seen.

The half-Italian Gunnar Barbarotti first appears on page 184. His professional life does not preclude constantly debating the existence of God, a one-way conversation and award-of-points system when the Inspector asks for reasonable and modest outcomes. Nothing too spectacular, nothing to tempt the fate whatever it is, more reassurance that life after a horrible divorce can still be fine. Just.

But in the coming weeks and months, Barbarotti struggles with the investigation into the missing two Hermanssons, with too many unknowns and lack of evidence. He wonders whether there was a link between the disappearances, or whether something completely random has happened. His professional partner Eva Backman keeps him in check, and although he tends to favour doom, nevertheless he seems positively optimistic compared to other famous Scandinavian investigators.

I hope that I won’t need to wait too long for the next book filled with existentialist anguish, crafty police work and Nesser’s witticisms: ‘Gunnar Barbarotti had never been in any doubt about the existence of the Devil. It was only the potential presence of God that was the problem.’